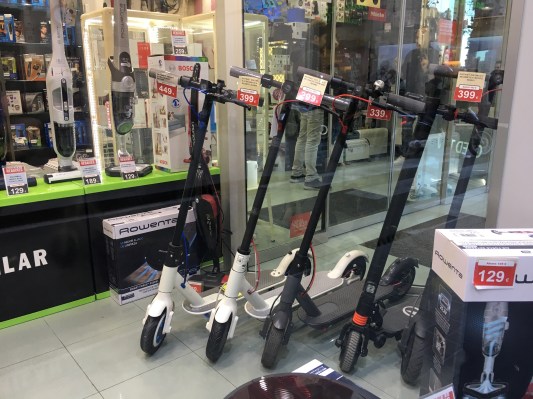 Investors are still pouring millions into scooter startups, albeit sometimes at flat valuations. At the same time a little cash is flowing the other way, in cases where cities have realized the importance of prioritizing the needs of the local environment and its citizens, over and above the ambitions of VCs for a swift and lucrative exit.

Scooter startups affected by such regulatory bumps in the road are, unsurprisingly, rather less keen to shout about this sort of policy friction and the negative cash and ride flow it generates.

In one recent incident in Spain, in the Catalan capital of Barcelona, El Pais reported that the town hall fined a local scooter startup, called Reby, for contravening urban mobility rules.

The startup is so new it doesn’t even have scooters available for public hire yet. But it’s already had some of its ‘test’ rides removed by police and been fined for breaking scooter sharing rules.

If it was hoping to copy-paste from an Uber 1.0 playbook, things aren’t looking good for Reby. (Indeed, that’s a very tatty manual in most places these days.)

Spain’s capital city Madrid also forced a temporary suspension on scooter sharing startups recently, as we reported last month, after changes to mobility laws that tighten the screw on scooter sharing — requiring already operational startups to tweak how their rides operate in order to come into compliance.

While Madrid authorities haven’t banned scooter sharing entirely, they have imposed more limits on where and how they can be used, thereby injecting fresh friction into the business model.

But compared to Barcelona that’s actually a free ride. Things aren’t so much bumpy as roadblocked entirely for scooter sharing in the latter city where regulations adopted by Barcelona town hall in 2017 essentially ban the on-demand scooter model, at least as startups prefer to operate it.

These rules require companies that wanting to offer scooters for hire must provide a guide with the ride (one guide per maximum two people), as well as a helmet. They must also verify that the person to whom the vehicle is hired has the ability to ride it properly.

Rides might scale if you’re able to litter enough cheap and easy scooters all over the urban place but a (human) guide per two rides definitely does not.

Yet, as we’ve written before, there’s no shortage of patinetes electronics weaving around Barcelona’s often narrow and crowded streets. Most of these are locally owned though. And the town hall appears to prefer it that way. After all, people who own high tech scooters aren’t usually in a rush to ditch them in stupid places.

In its 2017 by-law regulating various personal mobility vehicles (PMVs) — including, but not limited to, two-wheeled electric scooters — the city council said it wanted to foster safer and sustainable usage of scooters and other PMVs, pointing to “the growing presence of this new mobility which is taking up more and more road space”.

“Barcelona City Council is committed to a sustainable city mobility model which gives priority to journeys on foot, by bicycle or on public transport,” it added, setting out what it dubbed a “pioneering regulation” that forbids e-scooter use on pavements; imposes various speed restrictions; and gives priority to pedestrians at all times.

Scooters can also only be parked in authorized parking places, with the council emphasizing: “It is forbidden to tie them to trees, traffic lights, benches or other items of urban furniture when this could affect their use or intended purpose; in front of loading or unloading zones, or in places reserved for other users, such as persons with reduced mobility; in service areas or where parking is prohibited, such as emergency exits, hospitals, clinics or health centres, Bicing [the local city bike hire scheme] zones and on pavements where this might block the path of pedestrians.”

These include the aforementioned guide, helmet and minimum skill level rule. There’s also a registration scheme for PMVs being used for economic activity which allows city police to scan a QR code that must be displayed on the ride to check it conforms to the regulation’s technical requirements. How’s that for a smart use of tech?

“There may be specific restrictions in specific areas and districts where there is a lot of pressure from these kinds of vehicles or they pose a specific problem,” the council also warns, giving itself further leeway to control PMVs and ensure they don’t become a concentrated nuisance.

Despite what are clear, strict and freshly imposed controls on scooter sharing, that hasn’t stopped a couple of smaller European startups from trying their luck at getting rentable rubber on Catalan carrers anyway — perhaps encouraged by demonstrable local appetite to scoot (that and the lack of any big Birds).

In Reby’s case, the very early stage Catalan startup, whose co-founders’ LinkedIn profiles suggests the business was founded last July, has a website and not much else at this point, aside from its ambitions to follow in the wheeltracks of Bird, Lime et al.

Nonetheless it has racked up fines worth €5,300 (just over $6,000), according to town hall sources, after being deemed to have breached the city’s PMV rules.

Reby had put out up to a hundred scooters in Barcelona for ten days, according to El Pais, padlocking them to bike anchors (with a digital password for unchaining delivered via app) — presumably in the hopes of locating a grey area in the regulation and unlocking the pile em’ high, rent em’ cheap dockless on-demand scooter model that’s disrupted cities elsewhere.

Penalties are levied per infringement, so essentially per scooter deployed on the street. And while a few thousand euros might not sound that much of a big deal, the more scooters you scatter the higher the fine scales. And of course that’s not the kind of scaling these startups are scooting for.

We asked Reby for its version of events but it didn’t want to talk about it. A spokesman told us it’s still very early days for the business, adding: “We are a very small team and haven’t launched yet officially. We are doing some tests in Barcelona.”

A more established European scooter startup, Berlin-based Wind, has also clashed with city hall. El Pais reports it had around 100 scooters seized by police last August, also after abortively trying to put them on the streets for hire.

Town hall sources told us that, in Wind’s case, the company’s rides were removed immediately by police, not even lasting a day — so there wasn’t even the chance for a fine to be issued. (We contacted Wind for comment on the incident but it did not respond.)

The bottom line is legislative hurdles won’t simply vanish because startups wish it.

At the same time, keeping streets flowing, uncluttered and safe is the bread and butter business of city councils — naturally pushing PMVs up the regulatory agenda.

You also don’t have to look far for tragic stories vis-a-vis scooters. Last summer a 90-year-old pedestrian was killed in a suburb of Barcelona after she was hit by two men riding an electric scooter. In another incident in a nearby town a 40-year-old scooter rider also reportedly died after falling off her ride and being run over by a truck.

The risks of PMVs mingling with pedestrians and more powerful road vehicles are both clear and also not about to disappear. Not without radical action to expel most non-PMV vehicles from city centers to expand the safe (road) spaces where lower powered, lighter weight PMVs could operate. (And no major cities are proposing anything like that yet).

Add to that, in European cities like Barcelona, where there has already been major investment in public transport infrastructure, there’s a clear incentive to funnel residents along existing tracks, including by tightly controlling new and supplementary forms of micro-mobility.

If the Barcelona city council has one potential blind spot where urban mobility is concerned it’s air pollution. Like most dense urban centers the city often suffers terribly from this. And savvy scooter companies would do well to be pressing on that policy front.

But there’s little doubt that would-be fast-follower scooter clones have their work cut out to scale at all, let alone go the distance and get big enough to attract acquisitive attention from the category’s beefed up early movers.

Even then, for the Birds and Limes of the scooter world, multi-millions in funding may buy runway and the opportunity to scoot for international growth but policy roadblocks aren’t the kind of thing that money alone can shift.

Scooter startups need to sell cities on the potential civic benefits of their technology, by demonstrating how PMVs could replace dirtier alternatives that are already clogging roads and having a deleterious impact on urban air quality, as part of a modern and accessible mobility mix.

But that kind of lobbying, while undoubtedly benefiting from local connections, takes money and time. So there’s no shortage of challenge and complexity in the road ahead for scooter startups, even as — as we wrote last month — the investment opportunity is shrinking, with investors having now placed their big bets.

In some cities, scooter ownership also appears to be growing in popularity which will also eat into any sharing opportunities.

One regional investor from an early stage Madrid-based fund that we spoke to about scooters had no qualms at having passed over the space. “We’ve looked at various companies in the space and in Spain but we’re not very attracted by the market given our fund size, competition and regulation question marks,” KFund‘s Jamie Novoa told us.

So those entrepreneurs still dreaming of fast following the likes of Bird, Lime and Spin may find the race they were hoping to join is already over and park gates being padlocked shut.