Our dystopian cyberpunk here and now 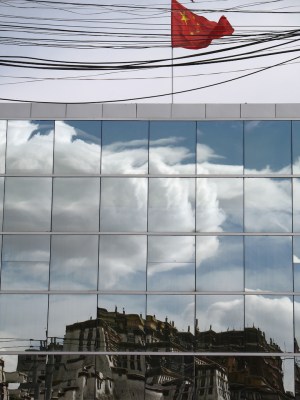 We in the West love our apocalyptic science fiction, in which cartoonishly evil authorities ruthlessly oppress all who so much as wonder about its absolute power, enforced via ubiquitous surveillance technology. Think The Hunger Games, Blade Runner 2049, V for Vendetta, just to pick a few. Well — to trot out that infamous William Gibson line, the future is here, it’s just unevenly distributed.

Yearly reminder: unless you're over 60, you weren't promised flying cars. You were promised an oppressive cyberpunk dystopia. Here you go.

I’m thinking of Xinjiang, northwest China, which, according to panoply of reports over the last year, has become an oppressive surveillance police state: Georgetown professor James Millward conjures it:

While on your way to work or on an errand, every 100 meters you pass a police blockhouse. Video cameras on street corners and lamp posts recognize your face and track your movements. At multiple checkpoints, police officers scan your ID card, your irises and the contents of your phone. At the supermarket or the bank, you are scanned again, your bags are X-rayed and an officer runs a wand over your body […] The system crunches all of this into a composite score … [Based on it] you may or may not be allowed to visit a museum, pass through certain neighborhoods, go to the mall, check into a hotel, rent an apartment, apply for a job or buy a train ticket. Or you may be detained to undergo re-education.

It’s the little details which really drive home the real-life dehumanization of the surveillance state. “Installing cameras in some people’s homes.” “Officers recorded their voices, took pictures of their heads at different angles and collected hair and blood samples.” Targeting “people who have received a phone call from overseas.” (Both from NYT.)

Fuel stations are surrounded by barbed wire. Passengers must dismount outside the station; only the driver is allowed inside after strict ID and security checks […] One tourist who tried to buy a knife uploaded a video on how the knife was registered to the buyer’s ID, the ID number was then laser-emblazoned onto the blade, and his face recognition recorded

— Suhasini Haidar, in excellent travelogue piece in The Hindu.

The first thing that strikes you on arrival to Xinjiang, driving from the airport into the city, is the propaganda. It’s everywhere […] The other thing that is always in your field of sight is the police. Oh, the police. They are literally (literally) everywhere […] Xinjiang is a police state, and it’s open about it. Blatant […] “your conversations are being listened to, your GPS is being recorded. If you do anything stupid on the phone, police will come in less than 30 minutes and take you away” […] Inside both entries and exits, there is a metal scanner, an ID card reader, and in some (not many) places a facial recognition camera. All places have a computer and a small box which is reportedly used to download all information from smartphones […] (Xinjiang still uses 3G signals, not LTE, I wonder why) […] if [restaurants] want to keep things private by blocking the windows, they have to have surveillance cameras inside […] We saw life under a complete, multi-layered surveillance system that has basically no blind spots at all.

— Vadim Mikhailov, in another fantastic first-person travelogue published in Palladium

There exist “many credible reports that China had detained a million or more ethnic Uighurs in the western region of Xinjiang and forced as many as two million to submit to re-education and indoctrination.” “The Australian Strategic Policy Institute analysed 28 camps across Xinjiang and found they had expanded 465% in size since 2016,” reports The Guardian.

Wait, it gets worse: “Highly educated intellectuals and academics and scientists and software engineers are being held in these facilities,” says Maya Wang of Human Rights Watch. “Satellite images and previously unreported official documents indicate that growing numbers of detainees are being sent to new factories, built inside or near the camps, where inmates have little choice but to accept jobs and follow orders,” according to the NYT.

Why the crackdown? Partly because Xinjiang is a key hub of China’s massive new “Belt and Road Initiative,” China’s massive $900 billion project being built by China to improve infrastructure connections and spur trade with other nations. (See also the NYT report on McKinsey in China, and their choice of Xinjiang for a corporate retreat last year last year.) Partly because two years ago Xinjiang’s leader was replaced by notorious soldier-turned-politician Chen Quanguo.

(It’s easy to imagine that this appointment was to some extent a strategy directly out of Machiavelli’s The Prince: “To clear himself in the minds of the people, and win them over to himself, he desired to show that, if any cruelty had been practised, it had not originated with him, but in the cruel nature of his minister.”)

But also, partly because they can: because this dystopian surveillance police-state technology is now cheap and reliable enough to roll out at massive scale. Hard not to be chilled by that … or by visions of what the next generation(s) of scalable technology will be used for. Xinjiang isn’t just a humanitarian crisis, it’s a living warning for us all.