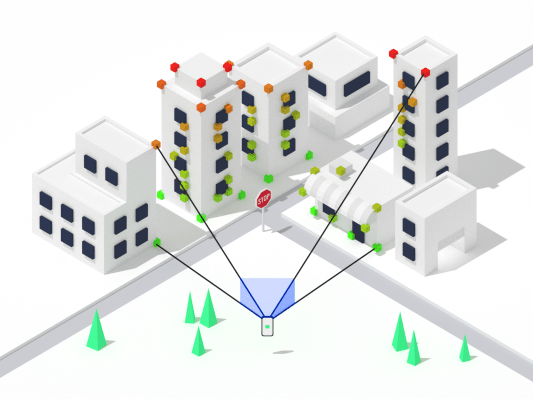 Scape Technologies, a London-based computer vision startup, is de-cloaking today to announce that it has raised $8 million in seed fund and launching the first iteration of its “Visual Positioning Service,” which lets developers build apps that require location accuracy far beyond the capabilities of GPS alone.

The technology will initially target augmented reality apps, but can also be used to power applications in mobility, logistics and robotics. More broadly, Scape wants to enable any machine equipped with a camera to understand its surroundings.

Backing the round is LocalGlobe, Mosaic Ventures, Fly Ventures, and company builder Entrepreneur First. Scape Technologies was a member of EF cohort 7, which pitched at EF’s London demo day almost two years ago. The startup has remained pretty stealthy ever since. Until now, that is.

“There is a huge amount hype in the AR space right now which is why we’ve been working for the last two years in stealth, taking our time to make sure our technology is accurate, robust and scalable,” Scape Technologies co-founder and CEO Edward Miller tells TechCrunch. “We set out on a mission to build a new type of infrastructure, to allow computers to safely interpret and navigate the world, using only a camera. To make this possible, we’ve built what we refer to as our ‘Vision Engine’, which lies at the heart of everything we do at Scape”.

Miller describe’s Scape’s “Vision Engine” as a large-scale mapping pipeline that creates 3D maps from ordinary images and video. Camera devices can then query the Vision Engine using the startup’s newly launched Visual Positioning Service API to determine their exact location with far greater precision than GPS can ever provide. Starting today, the Visual Positioning Service is available within London for select partners via Scape’s SDK.

The fact that Scape’s 30 person-plus team has been able to build a detailed 3D map of London is slightly head-scratching, and that’s before factoring in the machine learning and computer vision technology required to enable machines to reference that map to accurately pinpoint “hyper location”. Miller declines to go into much detail on record with regards to how the young company was able to pull off such a large mapping exercise, for fear of giving away too much of the startup’s secret sauce.

However, it is noteworthy that Miller was one of the U.K.’s first Street View photographers, giving him a unique insight into how a company like Google can build maps at scale. He also has a background in interactive imagery, having been involved in VR projects for companies such as ESPN, UEFA and Jaguar. Scape’s other co-founder and CTO Huub Heijnen was previously a researcher in the field of robotics, where he was involved in teaching multi-legged robots how to learn to walk. “It’s pretty hardcore,” says Miller of his co-founder’s previous work.

Teaching a computer to “see” the world with a camera is no small task, either. Whereas humans might see a photograph and recognise in it a car or a building, a computer only sees a bunch of ones and zeros. The role of computer vision to interpret these ones and zeros into something meaningful.

“We’ve had to make significant technological breakthroughs to allow computers to recognise their location accurately, quickly and in varying weather conditions,” explains Miller. “Most importantly, we’ve invested significant efforts in ensuring our Visual Engine is scalable. The world is a big place and we can’t afford to rely on a system that can’t grow with demand. Unlike other approaches, Scape’s Vision Engine scales horizontally to 100s of servers at a time, so we can provide our Visual Positioning Service within areas the size of an entire city”.

More ambitious still, enabling accurate location is “just the beginning”. Over the next 5 years, Scape plans to develop what it calls “ubiquitous spatial intelligence,” which will allow devices to understand where they are and what is around them, using only a camera. The thinking is that with exponential growth in IoT and wearables, the world is becoming increasingly augmented with physical hardware designed to live and operate amongst us.

“With new industries like augmented reality and self-driving cars on the rise, it’s vital that these new types of computers understand with extreme precision where they are and what’s around them,” cautions Scape’s CEO.