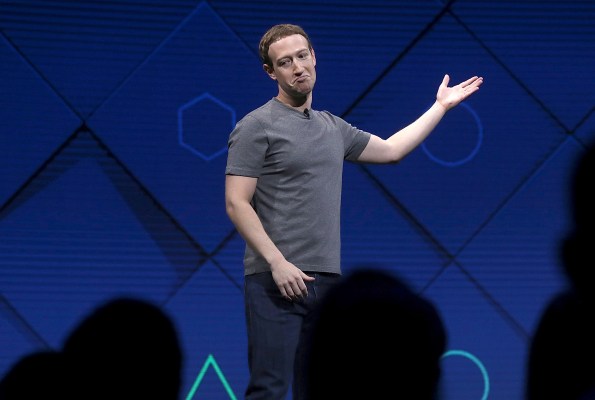 After the year Mark Zuckerberg’s had, you’d think he’d struggle to appear so chipper.

“I’m proud of the progress we’ve made,” he said in an end-of-year note posted on his Facebook page for everyone to see. Acknowledging that the social network played its part in the spread of hate speech, election interference, and misinformation, Zuckerberg’s note seemed more upbeat about his response to the hurricane of hurt caused by the company’s laissez-faire attitude to world affairs, and less concerned about showing contrition and empathy for the harm Facebook caused in the past year — including its inability to keep its users’ data safe and, above all else, its failure to prevent its site from being used to incite ethnic violence and genocide.

Zuckerberg’s tone-deaf remarks read like 1,000 words of patting himself on the back.

But where the Facebook co-founder pledged to “focus on addressing some of the most important issues facing our community,” he conveniently ignored some of the most damaging, ongoing problems that the company has shown little desire to solve, opting instead for quick fixes or simply pretending they don’t exist.

“More than 30,000 people working on safety…” isn’t enough to police the platform

A decade ago, Facebook had just 12 people moderating its entire site — some 120 million users. Now, the company relies largely on an army of underpaid contractors spread out across the world to moderate content millions of potentially rule-breaking posts on the site each week.

Zuckerberg said that the company has this year increased those working on safety to “more than 30,000 people.” That’s on top of the 33,600 full-time employees that Facebook had as of the end of September. But that’s a massive task to police Facebook’s 2.27 billion monthly active users. Those 30,000 new safety contractors equates to about one moderator for every 75,660 users.

Facebook’s contractors have long complained about long hours and low pay, and that’s not even taking into account the thousands of gruesome posts — from beheadings to child abuse and exploitation — they have to review each day. Turnover is understandably high. No other social network in the world has as many users as Facebook, and it’s impossible to know what the “right number” of moderators is.

But the numbers don’t add up. Facebook’s army of 30,000 safety staffers isn’t enough to combat the onslaught of vitriol and violence, let alone against an advanced adversary like the nation state actors that it’s constantly blaming.

Zuckerberg made no mention of the photo data exposure and account breaches that the company had to contend with this year, even if he couldn’t avoid mentioning Cambridge Analytica, the voter research firm that misused 87 million Facebook users’ information, just the once.

Yet, Zuckerberg made no commitment to doubling down the company’s efforts to secure the platform, despite years of its “move fast and break things” mentality. Since the departure of former chief security officer Alex Stamos in August, the company hasn’t hired his replacement. All signs point to nobody taking the position at all. While many see a chief security officer as a figurehead-type position, they still provide an executive-level insight into the threats they face and issues to handle — no more than ever after a string of embarrassing and damaging security incidents.

Zuckerberg said that the company invests “billions of dollars in security yearly.” That may be true. But without an executive overseeing that budget, it’s not confidence-inducing knowing that there’s nobody with the years of experience needed to oversee a company’s security posture in control of where those billions go.

Fake news, misinformation and election meddling is one thing, but Zuckerberg’s refusal to acknowledge the direct impact that Facebook had on Myanmar’s ethnic violence — which the United Nations is calling a genocide.

It can’t be much of a surprise to Zuckerberg. The UN said Facebook had a “determining role” in inciting genocide in the country. He faced questions directly from U.S. lawmakers earlier this year when he was told to testify to senators in April. Journalists are regularly arrested and murdered for reporting on the military-backed government’s activities. The Facebook boss apologized — which human rights groups on the ground called “grossly insufficient.”

Facebook said last week that it has purged hundreds of accounts, pages and groups associated with inciting violence in Myanmar, but continues to refuse setting up an office in the country — despite groups on the ground saying would be necessary to show it’s serious about the region.

“That doesn’t mean… people won’t find more examples of past mistakes before we improved our systems.”

Zuckerberg said in his note that the company “didn’t focus as much on these issues as we needed to, but we’re now much more proactive.”

“That doesn’t mean we’ll catch every bad actor or piece of bad content, or that people won’t find more examples of past mistakes before we improved our systems,” he said. Some have seen that as a hint that some of the worst revelations is yet to come. Perhaps it’s just Zuckerberg hedging his bets as a way to indemnify his remarks from criticism when the next inevitable bad news break hits the wires?

In his 1,000-word post, Zuckerberg said he was “proud” three times, he talked of the company’s “focus” four times, and how much “progress” was being made five times. But there wasn’t a single “sorry” to be seen. Then again, he’s spent most of Facebook career apologizing for the company’s fails. Any more at this point would probably come across as trite.

Zuckerberg ended on as much as a cheery note as he began, looking to the new year as an opportunity as “building community and bringing people together,” adding: “Here’s to a great new year to come.”

Well, it can’t be much worse than this year. Or can it?