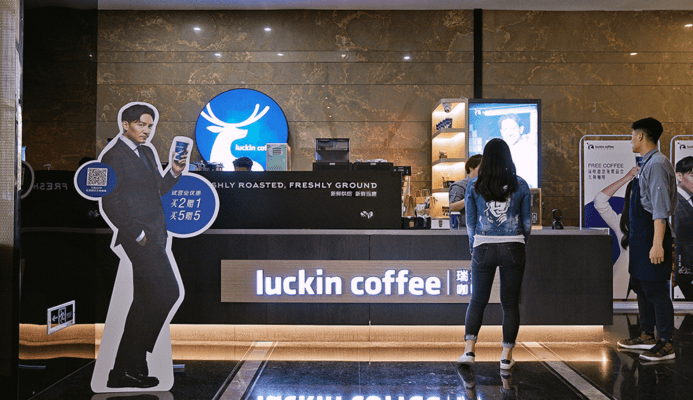 Luckin, a startup that vows to topple Starbucks’ dominance in China, announced on Wednesday that it’s lifted its valuation to $2.2 billion after raising $200 million in a series B funding round.

That came only five months after the coffee upstart, which soft-launched in January, picked up $200 million in investment. Luckin has been on a spending spree to open shop and burnt through $150 million within the first six months in operation, its founder said in July when the company had a cash reserve of 2 billion yuan, or roughly $290 million.

Luckin currently operates across 21 major Chinese cities, totaling more than 1,700 shops. For comparison, Starbucks’s footprint spanned 3,300 stores in China as of May, though one has to take into account that the Seattle coffee chain entered China nearly 20 years ago.

Different from Starbucks, Luckin’s brick-and-mortar facilities are a mix of sit-down cafes and pickup booths, which double as delivery hubs, and take-out kitchens that are solely for delivery staff to pick up caffeine-infused orders and put them in customers’ hands within 30 minutes.

As a result, Luckin managed to build a dense network targeting office workers who may be drawn to the idea of coffee delivery because they can’t leave their desk. There’s at least one Luckin location within a 500-meter radius anywhere in downtown Shanghai and Beijing, the company claimed.

The light speed at which Luckin has expanded in less than a year probably got on the nerves of Starbucks, which went on to team up with Alibaba-owned food delivery giant Ele.me in August to bring coffee to people’s doorstep. The American company aims to expand its delivery services to 30 cities in China by the end of 2018.

Luckin’s co-founder and chief executive officer Qian Zhiya, who is the former chief operating officer at one of China’s largest auto rental firms CAR Inc, said her startup will continue to invest in products, technology and business development to improve user experience following the new round.