How Uber will become an ad company, starting with Eats Pool

We got our first glimpse of this future last week when I reported that Uber Eats was offering restaurants in India bonus visibility in a Specials section if they’d offer discounts on meal bundles to Uber’s customers. Knock some rupees off the price of a sandwich, fries, and a drink, and a restaurants wins itself some enhanced discoverability. Whether a chef wants to boost orders during slow hours, get rid of surplus food, preference high margin items, or just score new customers, there’s plenty of reasons to pay Uber — even if currently only indirectly through discounts instead of a direct ad buy.

But now Uber’s senior director and head of Eats product Stephen Chau has confirmed to me the company’s intentions to become an ad company. “There’s a bunch of different ways we can work with restaurants over time. If we have all the restaurants on the marketplace and we give them tools to help them grow, then this will be a very efficient marketplace. They’re going to be spending those ad dollars somewhere” Chau tells me. “One of the things we’ve been experimenting with is allowing retailers to create promotions themselves and show them within the product.”

This conversation emerged from TechCrunch spotting Uber’s latest effort to influence where people choose to eat. To be worthy of ad dollars, Uber has to build leverage over restaurants by accruing sway over how people decide between restaurants. And with Uber confidentially filing to go public last week, it needs to prep new revenue streams. So it’s created what’s effectively “Uber Eats Pool”.

In response to our inquiry, Uber confirmed it’s now testing in some markets a system designed to batch multiple orders from different customers nearby each other to a single restaurant. That way, a single delivery driver can pick up all the orders at once and then speedily distribute them to neighbors or co-workers. Uber must incentivize customers who are close to each other to pick the same restaurant in rapid succession, so it offers a discount.

“$2 off your order — share a courier with a nearby order” the promotion announces atop the Uber Eats homescreen above a carousel of restaurants where you can grab the discount. It’s equipped with a countdown timer to when it will refresh the list of restaurants that follows users on an eatery’s order page. This triggers a sense of urgency to hurriedly buy through Uber Eats (and not check competitors), but also to ensure orders come in close enough together that the first one cooked won’t have to wait long for the last before they’re all scooped up for delivery.

Some customers actually play the Uber Eats Pool discounts like a game they can beat, waiting through several rounds of the timer until they spot one of their favorite restaurants, Chau says with a laugh. For now, passengers don’t ride alongside food orders, though that’s certainly a possibility in the future. And if Uber Eats can batch your order into a Pool with other customers, it will retroactively give you the discount.

“It’s similar to what we did with Uber Pool” Chau tells me. “Generally people are coming in with an intent to eat but there are many, many options available to them. We’re giving you a discount on the food delivery by using machine learning to understand these are some restaurants it might make sense to order from. When multiple people order from the same restaurant, delivery drivers can pick up multiple people’s food.”

Therein lies the leverage. As Stratechery’s Ben Thompson writes about aggregation theory, internet companies are gaining great influence by becoming marketplaces that connect customers with suppliers when previously customers preemptively chose a particular supplier. These platforms not only gain enormous amounts of data on customer preferences, but they also hold the power to point customers to certain suppliers that are willing to play ball.

With all the data, the platforms know just who to show the ads to for a maximum conversion rate. And over time as the aggregator’s perks lure in more customers, it can pit suppliers against each other to further drop their prices or pay more for ads. Spotify used its own playlists to control what songs became popular, and the artists and record labels became beholden to cutting it sweeter deals to stay visible. Amazon looks like the best place to shop because it makes merchants fiercely fight to offer the lowest prices and best customer experience. With Uber Eats Pool, Uber is flexing its ability to influence where you eat, training you to trust where it points you when businesses eventually pay directly to be ranked higher in its app.

“Eats proves the power and potential of the Uber platform, showing how our logistics expertise can create the easiest way to eat” Chau tells me. “We partner with a wide selection of restaurants and bring our trademark speed and coverage to the food delivery experience. This feature shows how leveraging the Uber network allows us to offer people even more affordable dining options.” That quote is even more telling than at first glance. It’s the logistic network that accrues the power and creates leverage over the supplier to benefit customers with the lowest prices. 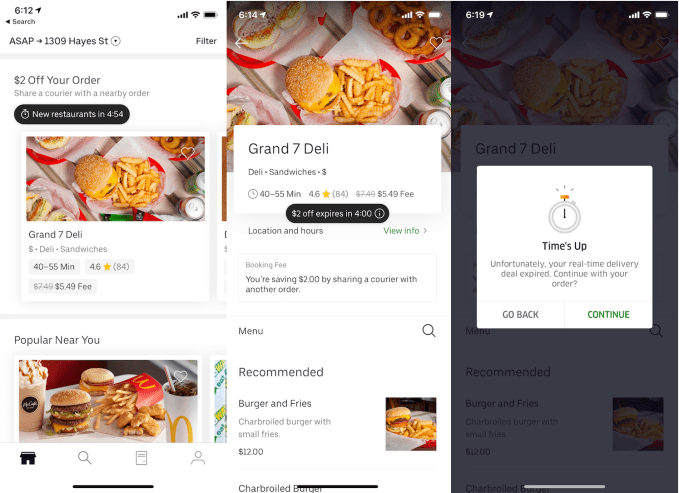 “We can see on Eats how much more business they’re bringing in and how much is incremental new business. Eventually we’ll be able to do very precise targeting. ‘People who haven’t tried my restaurant before, let’s give them a discount’” Chau tells us. Restaurants are asking him how to grow delivery as a percentage of their orders. “We can see the types of food people are ordering right now but also what they’re searching or are not able to order [because that cuisine isn’t available nearby]. We’re working with them to create new options to fill that gap. They’re able to get much more utilization of their fixed assets and iterate on these concepts much faster than they’re used to.”

Uber demonstrated the data science it could dangle over restaurants with its review of Uber Eats 2018 trends it published this morning. It predicts clean eating, plant-based foods, smoothie bowls, milk alternatives, fermented items like kimchi, and Instagrammably dark ‘goth food’ will rise in popularity next year. Meanwhile, now-tired social media bait ‘rainbow-colored foods’, brussel sprouts, and seaweed are on the decline.

It becomes easy to imagine restaurants running Uber Eats software for tracking order trends and predicting spikes to better manage food and staffing resources, with a baked-in option to buy ads or give deeper discounts to get seen by more hungry people. Chau concludes “Restaurants can think of Uber Eats as a platform that gives them this intelligence.”