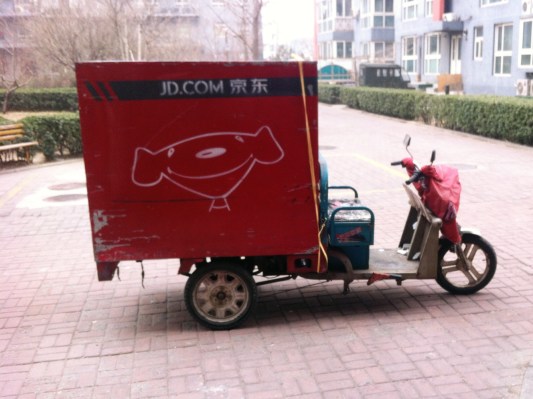 Months after it landed a major $550 million investment from Google, China’s JD.com — the country’s second highest-profile investor behind Alibaba — has teamed up with another U.S. tech giant: Intel.

JD and Intel said today that they will set up a “lab” focused on bringing internet-of-things technology into the retail process. That could include new-generation vending machines, advertising experiences, and more.

That future is mostly offline — or, in China tech speak, ‘online-to-offline’ retail — but combining the benefits of e-commerce with brick and mortar physical retail shopping. Already, for example, customers can order ahead of time and come in store for collection, buy items without a checkout, take advantage of ‘smart shelves’ or simply try products in person before they buy them.

Indeed, TechCrunch recently visited a flagship JD ‘7Fresh’ store in Beijing and reported on the hybrid approach that the company is taking.

JD is backed by Chinese internet giant Tencent and valued at nearly $30 billion. The company already works with Intel on personalized shopping experiences, but this new lab is focused on taking things further with new projects and working to “facilitate their introduction to global markets.”

“The Digitized Retail Joint Lab will develop next-generation vending machines, media and advertising solutions, and technologies to be used in the stores of the future, based on Intel architecture,” the companies said in a joint announcement.

JD currently operates three 7Fresh stores in China but it is aiming to expand that network to 30. It has also forayed overseas, stepping into Southeast Asia with the launch of cashier-less stores in Indonesia this year.