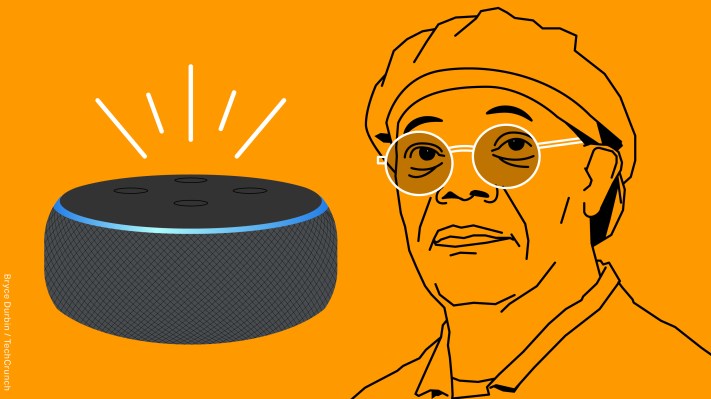 Alexa just read me Monday’s baseball scores. It was great for two reasons. First, the A’s shut out the Mariners 9-0 in the second game of a doubleheader. And second, she did so in Samuel L. Jackson’s voice. With Amazon based in Seattle, I assume they’re happy I’ve chosen to focus on the latter fact for the rest of this post.

Alexa heads Toni Reid and Rohit Prasad joined us onstage today at Disrupt to discuss the smart assistant’s history, biggest obstacles and future. They also used the occasion to announce that the highest-grossing actor of all time now has his own wake word. After installing the Samuel L. Jackson celebrity voice skill, Alexa users can make the “Pulp Fiction” star their default assistant voice, triggering him with the wake words “Hey Samuel.”

I’ve been using the skill on an Echo Show this week, and it’s a fun addition to Alexa that swears sometimes. In fact, there’s a warning when you install it that it’s not particularly family-friendly (like the real Samuel L. Jackson, he uses MFer a fair bit more than your standard voice assistant). Most of the commands are just standard Alexa stuff in Jackson’s voice, but there are some gems on there, like asking questions about reptiles on aircraft. He’s a bit less up on some of the deeper cuts from his filmography.

The addition of Jackson for Alexa follows Google’s own introduction of celebrity voice cameos from John Legend and Issa Rae. It’s clear that both companies believe a little star power goes a long way toward keeping users engaged with a virtual assistant. Honestly though, Jackson is one of the best gets you can imagine, both in terms of name recognition and novelty. It’s hard to think of too many names that might top it (Obama? Oprah? Pee-Wee Herman?).

One of the stories Amazon is interested in telling here is how surprisingly difficult it was to create a secondary wake word. The Samuel L. Jackson skill was available before, but essentially required the user to say ““Hey Alexa, ask Samuel…” Essentially a smart assistant game of telephone. The novelty wears off pretty fast, to be honest.

“The Alexa wake word has billions of interactions every week,” Alexa Senior Machine Learning Manager Shiv Vitaladevuni says in a post tied to the news. “However, there was a paucity of training data for the ‘Hey, Samuel’ wake word. To develop the multi wake word model for ‘Hey Samuel’ and Alexa, we had to develop new training and data modeling techniques, while drawing on learnings from the past.”