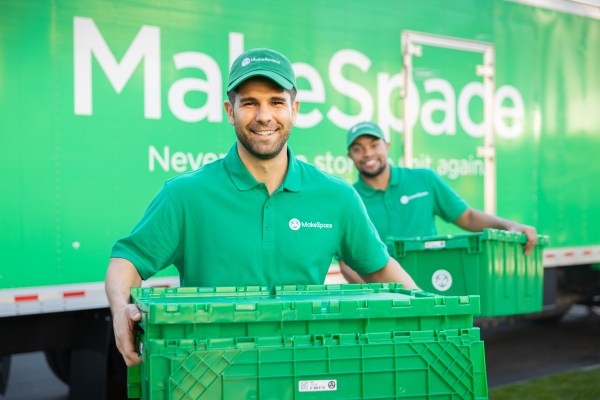 Sheltering-in-place and working from home curing COVID-19 has driven many of us to reorganize and de-clutter our living environments, and today one of the startups that is capitalizing on that trend is announcing a large round of funding to continue its growth. MakeSpace, an on-demand storage company that makes it easy to order, store and retrieve your physical belongings (also providing the muscle — that is, people — to help you do it), has closed a $55 million round — $45 million in equity funding and $10 million in debt — led by Iron Mountain, an existing investor and strategic partner whose primary focus is storage for larger businesses.

The funding is notable in part because of its size, but also because of the fact that it has happened at all.

On-demand storage startups have sprung up all over the world, hopeful that their new take on an antiquated, fragmented and valuable ($38 billion annually spent on storage) market would lead to big returns in a brave, new, Uberified world. But in reality, we’ve seen a lot of ups and downs, with various startups merging, closing, transferring and trying to pivot in the process. That’s left a consolidated space with fewer, hopefully better capitalised and better organised, competitors remaining. (Another biggie in this area is Clutter, backed by SoftBank and others, which has also been on a consolidation play as part of its growth.)

MakeSpace looks like it’s making a successful play to be in that group. This is a Series E for the startup — with other investors in the round including 8VC, Upfront Ventures, Maywic Select Investments, Ten Eighty, Provenio Capital, and CX Collective — and co-founder and CEO Rahul Gandhi said was at “a premium” to the valuation MakeSpace had in the last round of funding (a Series D that closed last year), without confirming either the previous or current numbers.

For some more context, PitchBook details what seems to have been a rollercoaster of valuations for the startup, which if accurate underscore some of those obvious challenges in this market. Update: Gandhi confirmed that the startup has now raised about $150 million and the valuation is higher than that.

MakeSpace itself has hit a number of milestones that point to its own growth. Last year, it added 20 new markets, bringing the total to 31 in North America, and doing so in a cost-effictive way. While one of the biggest costs (and stumbling blocks) for storage services to date has been grappling with building real estate businesses, MakeSpace has leaned on the infrastructure of its strategic investor Iron Mountain to bypass that challenge (and reduce those associated costs).

Gandhi said that it’s been outpacing “even our strongest forecasts,” with growth north of 30% on its targets, and he said the company has tens of thousands of customers using its service, which is priced in tiers starting at $69/month.

And while you might assume that a lack of house moving might mean less activity for storage companies, it seems the opposite is the case: MakeSpace and others like it have been designated “essential services” and its services have been in demand for people who are looking at their living spaces — and the prospect of spending significantly more time in them doing more than just watching Netflix, eating and sleeping — with new eyes. And ditto small businesses that are moving out of premises, even temporarily, or needing to rejig their environments because of distancing rules.

What’s also notable about MakeSpace is how it organises its workforce. While many on-demand businesses today have scaled by using an army of contractors, and all the complexities that this brings into the equation with regards to employee protections and benefits, MakeSpace has hired only full-time people, using its own team and those employed by Iron Mountain.

“They can get wonderful packages and all the benefits and perks to keep employee base happy,” Gandhi said. “It makes it easier to scale up the business and in terms of the hiring capabilities to help us scale.”

For a company built out of tech DNA — which is the other side of the business, involving smart logistics planning and storage optimising, and of course building it into an interface that can be used easily by workers and customers — workforce scaling and real estate/warehouse expansion are two of the biggest challenges in building on-demand storage businesses to compete with the heavyweights in the market, which include Public Storage, Extra Space Storage and U-Haul.

For Iron Mountain, it gives the firm, which focuses on enterprise users, a way to share in the revenues from tapping into the consumer market (optimizing use of its storage warehouses) without the costs of trying to service it directly.

“It has been amazing to see what MakeSpace has accomplished in the past year alone, growing from 4 to 24 markets almost overnight, and adding another 7 in 2020. They have taken a unique approach to storage that answers the modern customer’s demand for convenience, using technology to enhance the service and grow at an immense scale,” said Deirdre Evens, EVP and GM of North America Records and Information Management at Iron Mountain, in a statement.

“Especially now, services such as MakeSpace are delivering vital solutions for customers and businesses. MakeSpace has proven itself as an industry leader, finding new ways to offer support and services for this challenging time.  We continue to be both proud and excited about our partnership with MakeSpace and the opportunity to leverage Iron Mountain’s storage and logistics expertise to further penetrate the fast growing valet consumer storage market.”

Gandhi acknowledged also that while Iron Mountain is an obvious acquirer longer-term, it remains a minority investor.

“It’s really key that we remain independent,” he added. “We understand the strength of what they bring to table but in order for this business to capture major market share we felt collectively it was important for it to remain that way. At some point that discussion [on a bigger stake or acquisition] may happen but for now we feel incredibly good about what they are bringing to the table.”