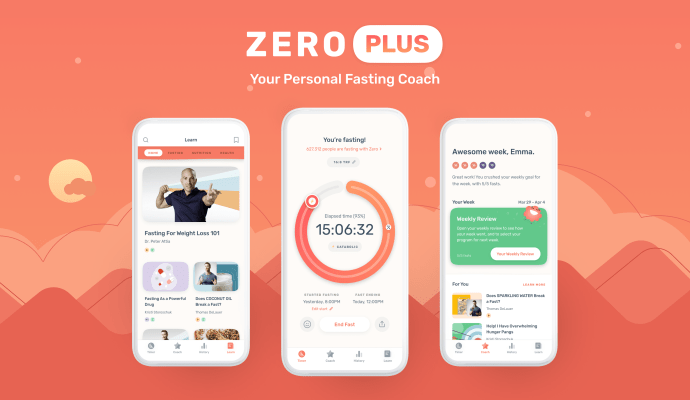 Mike Maser, a serial entrepreneur, has been focused on longevity since well before being diagnosed with stage 4 non-Hodgkins lymphoma more than five years ago. But he understandably took much greater interest in the potential role of fasting as a life-extending measure when he was convinced by friends to try it while undergoing cancer treatments.

While his care team “wasn’t so excited about it,” Maser recalls now, he was relatively young at the time, he hadn’t lost a lot of weight as do some people when battling cancer, and to him, fasting made more sense than taking an experimental drug, so he tried it. He liked it, too. Indeed, while he largely credits an autologous bone marrow transplant for saving his life, he has become a student of —  and advocate for — intermittent fasting in the ensuing years.

Perhaps it’s no surprise that Maser, who earlier sold a coaching app called Fitstar to Fitbit for around $25 million, would ultimately end up overseeing a fasting app that he says is now growing at an accelerated clip. Called Zero, he acquired it from designer and friend Kevin Rose in 2018, a hand-off that we discussed with Rose last week.

Between Maser’s track record and the world’s growing interest in fasting, it’s also no surprise that investors would want to get involved with him. In fact, today, his Montana-based startup, Big Sky Health —   it oversees Zero, along with a mediation app also acquired from Rose called Oak and months-old app called Less that helps users track their alcohol consumption — is announcing it has raised $8 million in Series A funding.

Greycroft led the round, with participation from earlier investors, including True Ventures and Trinity Ventures. The company has now raised $12.2 million altogether.

Certainly, Big Sky Health seems positioned well for the times. Not only is fasting taking off — Zero sees roughly 25,000 new downloads a day, says Maser — but more people are trying to meditate their way through pandemic-related anxiety.

They’re also drinking a lot — so much so that the World Health Organization has begun warning against alcohol altogether, cautioning that individuals cut back or else risk undermining their own immune systems.

Now, Big Sky — which employs just 15 people and whose team has been fully distributed from its founding days two years ago — just needs to keep its momentum going.

Toward that end, it has created a premium offering of Zero called Zero Plus, which provides custom fasting plans and what it describes as “custom, science-backed content to help guide users on their health journeys.” (The non-premium offering has more of a choose-your-own adventure vibe.)

“We kept hearing that users want more guidance,” said Maser in a call yesterday. The premium offering will “adapt to you based on your own personal journey,” including taking into account whether a user is new to intermittent fasting.

Big Sky’s team is also creating a roadmap of what’s next, which includes more social features for Zero. “We already have 800,000 people fasting together each night on the app, and users have a strong desire to encourage and interact with each other.”

As for Oak and Less, they are also getting more attention. Though Less is “not about going sober, it’s more about being mindful about how much you’re drinking,” says Maser, one can imagine it focusing increasingly on alcohol’s effects on the body and mind as Big Sky builds its wellness empire.

As for Oak, one need only to look at bigger rivals Calm and Headspace to appreciate the size of the opportunity. Calm has so far raised at least $143 million from investors to date, shows Crunchbase. Headspace has raise an estimated $168.2 million. What investors see? More Americans practicing meditation. Two years ago, for example, the Centers for Disease Control and Prevention reported that 14.2% of American said they had practiced meditation at least once in the previous year. In 2012, just 4.1% of adults said they practiced meditation.