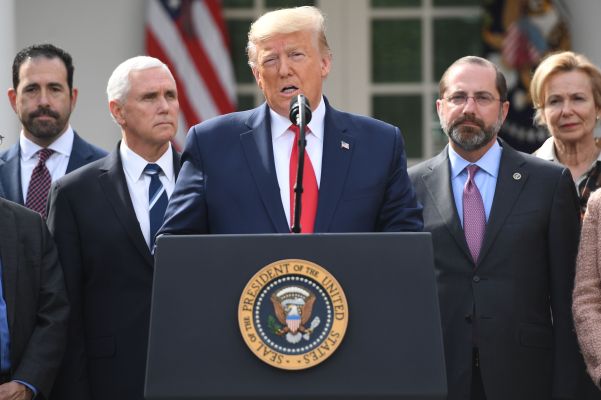 In an announcement from the White House Friday afternoon, President Donald Trump said that he has announced an emergency declaration to free up more federal resources that states can access as they respond to the novel coronavirus outbreak.

The order also breaks some of the logjam that had stymied the ability of local and state health care organizations to conduct testing for the novel coronavirus.

Typically the powers authorized in the Act are used to offer assistance during terrorist attacks and natural disasters. During the H1N1 swine flu pandemic in 2009, then-President Obama signed a national emergency declaration that allowed healthcare systems to implement disaster plans in case they became overwhelmed.

That declaration allowed the Department of Health and Human Services to waive certain regulatory requirements for healthcare facilities in response to the pandemic. Specifically, healthcare was able to submit waivers to establish alternate care sites and modify patient triage protocols, patient transfer procedures and other actions when they implement disaster plans, according to a government statement at the time.

The Trump administration had come under fire for not allowing states like California to access Medicaid in an effort to expand coverage. However, the authorization opens up state access to Medicaid more quickly than had happened under the Obama administration during its response to the swine flu outbreak. President Obama waited until October to issue an Emergency

Now the President has responded with just such an initiative. In his Rose Garden address the President also said he was “urging every state to set up emergency operation centers effective immediately.”

The President also praised the work being done by corporations like Roche, which has developed a new diagnostic tool to market that can more quickly identify infections, and Google, which is bringing a new pre-screening website online that anyone can access to check their symptoms and be directed to testing locations around the country.

The emergency declaration also included waivers on interest payments for student loans and a bulk purchase of oil to stock the oil reserve and bail out oil companies hit by the ongoing price war between Russia and Saudi Arabia.

“We had some very old and obsolete rules,” the President said of the regulations that have been circumvented byt the excecutive order.

These rules will allow testing to ramp up across the country in state labs and private facilities.

By using the Stafford Act, the President allows the Small Business Administration to make disaster loans available to eligible businesses and households. It also will allow states to tap Medicaid to finance and expand their capabilities to respond to the spreading COVID-19 epidemic.

At the same time the White House moved forward with an emergency declaration, it had stalled negotiations on the approval of a broad aid package negotiated between Democratic and Republican leadership.

Democrats in the House of Representatives led by Nancy Pelosi negotiated with U.S. Treasury Secretary Steve Mnuchin and White House reps until 4 a.m. on Friday to come up with an agreement. Voting on the deal has been delayed as Republican leadership waits for approval from the White House, according to a report in Reuters.

The House bill would provide free coronavirus testing and two weeks of paid sick leave for workers affected by the virus.

Additional economic aid is at the heart of the debate with Democrats hoping to expand coverage for workers who may not have access to corporate-funded safety nets and Republicans looking to provide tax cuts and financial support to businesses. The President has called for a $1 trillion payroll tax cut, which isn’t supported by congressional membership in either party, according to Reuters.

Stimulus is going to be a necessity if the U.S. is to withstand the economic blows a prolonged outbreak and botched response could bring and calm nervous investors.

“The financial markets and the coronavirus gave us advance warning. We really got a month’s notice on what was coming at us, and we just ignored it,” Claudia Sahm, a former Federal Reserve economist now at the Washington Center for Equitable Growth, told Barrons. “They’re looking ahead and they’re scared. I’m scared.”