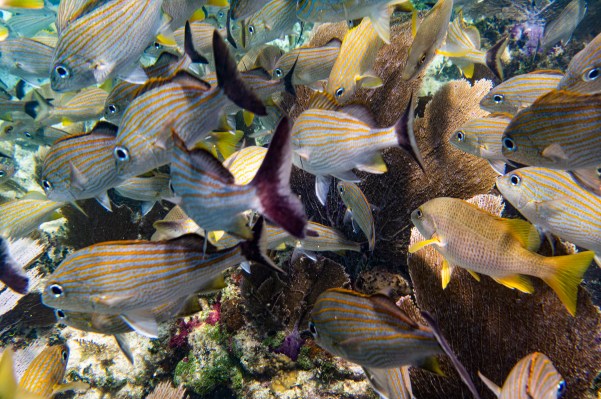 A new study, published in Nature Communications (via Washington Post), found promising early results from an experiment wherein sounds that you’d hear from a healthy reef are played back at a reef that’s dying. It may sound a bit like a bait-and-switch, but previous research has shown that one way to help reefs that are under duress is to encourage diverse and abundant fish populations, which can help counteract the downward spiral that ultimately leads to reef death.

Over the course of six weeks, researchers from the UK and Australia played audio recordings over speakers installed underwater at dead patches found in Australia’s Great Barrier Reef. The recordings were taken from healthy sections, and included a range of sounds typical to thriving coral communities, including noises made by fish, shrimp, molluscs and other reef-dwellers. These sounds act as cues for young fish looking to settle down and establish communities of their own.

The researchers found that up to twice as many fish ended up populating the reefs where these sounds were played, versus areas in similar states of decay where they were not. They also found that there was more biodiversity at these locations, with up to 50 percent more species in the mix vs. the control sites, and that the new denizens who did make their way to the reefs with the artificial sounds tended to set up to stay.

On its own, bringing fish populations back to dead and dying reefs won’t reverse the damage done. But this technique could be used in tandem with others being developed by scientists and researchers, including re-planting fresh coral and developing heat-resistant coral strains, to return vibrancy and life to portions of the oceans’ reefs where human activity has taken a serious toll.