The month saw $360 million invested in Nigerian focused payment ventures. That is equivalent to roughly one-third of all the startup VC raised for the entire continent in 2018, according to Partech stats.

A notable trend-within-the-trend is that more than half — or $170 million — of the funding to Nigerian fintech ventures in November came from Chinese investors. This marks a pivot in China’s engagement with Africa to tech. We’ll get to that.

Before the big Chinese backed rounds, one of Nigeria’s earliest fintech companies, Interswitch, confirmed its $1 billion valuation after Visa took a minority stake in the company. Interswitch would not disclose the amount to TechCrunch, but Sky News reporting pegged it at $200 million for 20%.

Founded in 2002 by Mitchell Elegbe, Interswitch pioneered the infrastructure to digitize Nigeria’s then predominantly paper-ledger and cash-based economy.

The company now provides much of the tech-wiring for Nigeria’s online banking system that serves Africa’s largest economy and population. Interswitch offers a number of personal and business finance products, including its Verve payment cards and Quickteller payment app.

The financial services firm has expanded its physical presence to Uganda, Gambia and Kenya . The Nigerian company also sells its products in 23 African countries and launched a partnership in August for Verve cardholders to make payments on Discover’s global network.

Visa and Interswitch touted the equity investment as a strategic collaboration between the two companies, without a lot of detail on what that will mean.

One point TechCrunch did lock down is Interswitch’s (long-awaited) and imminent IPO. A source close to the matter said the company will list on a major exchange by mid-2020.

For the near to medium-term, Interswitch could stand as Africa’s sole tech-unicorn, as e-commerce venture Jumia’s volatile share-price and declining market-cap — since an April IPO — have dropped the company’s valuation below $1 billion.

Circling back to China, November was the month that signaled Chinese actors are all in on African tech.

In two separate rounds, Chinese investors put $220 million into OPay and PalmPay — two fledgling startups with plans to scale in Nigeria and the broader continent.

PalmPay, a consumer oriented payments product, went live last month with a $40 million seed-round (one of the largest in Africa in 2019) led by Africa’s biggest mobile-phone seller — China’s Transsion.

The startup was upfront about its ambitions, stating its goals to become “Africa’s largest financial services platform,” in a company release.

To that end, PalmPay conveniently entered a strategic partnership with its lead investor. The startup’s payment app will come pre-installed on Transsion’s mobile device brands, such as Tecno, in Africa — for an estimated reach of 20 million phones.

PalmPay also launched in Ghana in November and its UK and Africa based CEO, Greg Reeve, confirmed plans to expand to additional African countries in 2020.

OPay’s $120 million Series B was announced several days after the PalmPay news and came only months after the mobile-based fintech venture raised $50 million.

Founded by Chinese owned consumer internet company Opera — and backed by 9 Chinese investors — OPay is the payment utility for a suite of Opera developed internet based commercial products in Nigeria. These include ride-hail apps ORide and OCar and food delivery service OFood.

With its latest Series A, OPay announced it would expand in Kenya, South Africa, and Ghana.

With OPay, PalmPay, and Lori Systems, startups in Africa have raised a combined $240 million from 15 Chinese investors in a span of months.

There are a number of things to note and watch out for here, as TechCrunch reporting has illuminated (and will continue to do in follow-on coverage).

These moves mark a next chapter in China’s engagement in Africa and could raise some new issues. Hereto, the country’s interaction with Africa’s tech ecosystem has been relatively light compared to China’s deal-making on infrastructure and commodities.

There continues to be plenty of debate (and critique) of China’s role in Africa. This new digital-phase will certainly add a fresh component to all that. One thing to track will be data-privacy and national-security concerns that may emerge around Chinese actors investing heavily in African mobile consumer platforms.

We’ve seen lines (allegedly) blur on these matters between Chinese state and private-sector actors with companies such as Huawei.

As OPera and PalmPay expand, they may need to do some reassuring of African regulators as countries (such as Kenya) establish more formal consumer protection protocols for digital platforms.

One more thing to follow on OPay’s funding and planned expansion is the extent to which it puts Opera (and its entire suite of consumer internet products) in competition with multiple actors in Africa’s startup ecosystem. Opera’s Africa ventures could go head to head with Uber, Jumia, and M-Pesa — the mobile money-product that put Kenya out front on digital finance in Africa before Nigeria.

Shifting back to American engagement in African tech, Twitter and Square CEO Jack Dorsey was on the continent in November. No sooner than he’d finished his first trip, Dorsey announced plans to move to Africa in 2020, for 3 to 6 months, saying on Twitter “Africa will define the future (especially the bitcoin one!).”

We still don’t know much about what this last trip — or his future foray — mean in terms of concrete partnerships, investment, or market moves in Africa from Dorsey and his companies. 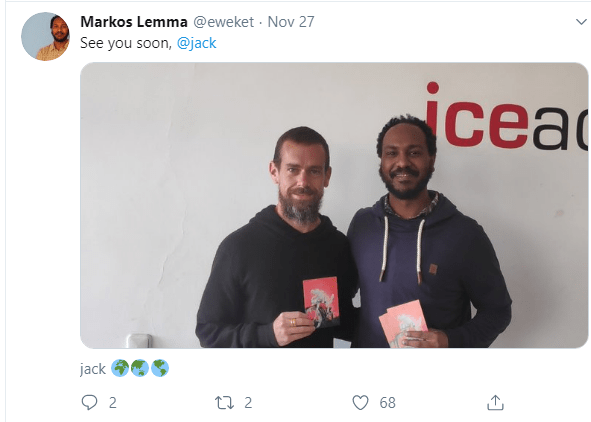 I know most of the organizations and people Dorsey talked to pretty well and nothing has shaken out yet in terms of partnership or investment news from his recent trip.

On what could come out of Dorsey’s 2020 move to Africa, per his tweet and news highlighted in this roundup, a good bet would be it will have something to with fintech and Square.

African tech around the ‘net