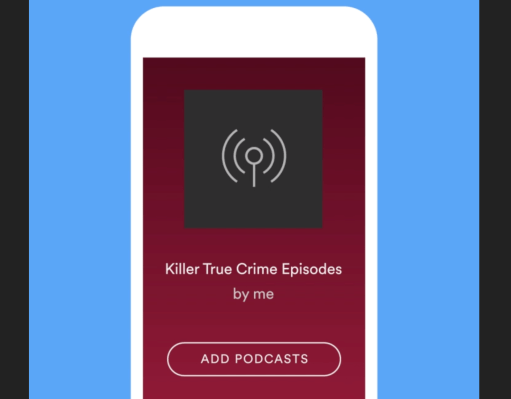 Spotify this morning announced a new feature that will allow users to add their podcasts to playlists. With the addition, users can create their own custom playlists of their favorite podcasts, or even those that combine music and audio — similar to Spotify’s own newly-launched “Your Daily Drive.”

With “Your Daily Drive,” Spotify put its personalization engine to work to combine both music and news from select sources. But with the ability to now build your own podcast-filled playlists, you won’t have to rely on Spotify’s curation as much.

Instead, you can build your own podcast playlists by tapping the three-dot menu to the right of the podcast episode and then “Add to playlist.” You can either choose to add it a playlist you’ve already created, or you can build a new one from scratch. You can continue to add more content to this playlist, including music, if you prefer.

The company says this functionality is something users have regularly requested since the integration of podcasts to its streaming music service. However, it’s not necessarily the easiest way to tune into the latest episodes of your favorite programs as it involves manual curation.

Many podcasts release new episodes every week or so — and don’t want to get stuck constantly building playlists for those. Instead, the feature makes more sense for curating a set of podcasts around a theme, or preparing yourself to binge your way through a few programs on a long commute or road trip, for example.

Spotify says today there are over 3 billion user-generated music playlists on its service, so it believes that its users will embrace this new curation ability, as well.

Once a podcast playlist has been created, it can be shared with friends or the public, just like music playlists can be. This could make for an interesting marketing tool for podcasters, who could put together playlists of their best episodes or those with high-profile guest stars, for example, as a way to introduce newcomers to their shows. But it could also serve as a way for friends to recommend their favorite shows to others, by putting together a list of their all-time favorite episodes.

For those interested in tracking news and entertainment, they could build playlists of podcast episodes from different sources all focused on the same topic. For instance, a playlist offering everyone’s reviews of the new iPhone.

The podcast playlist feature, for now, is mobile-only. On desktop, you can only stream the playlists you made, but can’t build them yet, Spotify says.