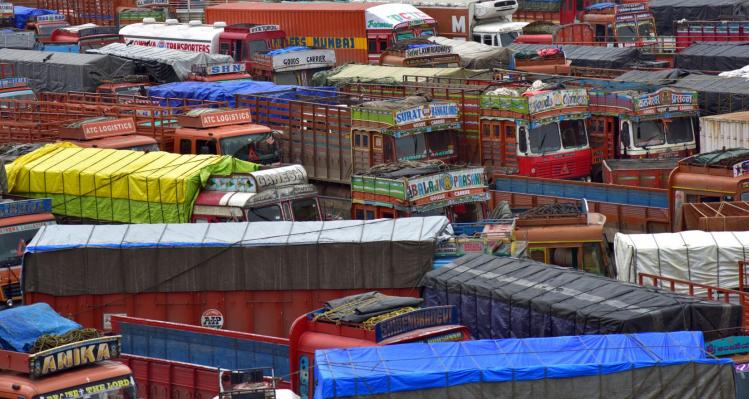 India’s B2B supply chain is slowly shifting into the digital era. Following a $23 million investment for Moglix, which helps bring business and manufacturing procurement online, LetsTransport, a startup that brings increased efficiency to logistics and business transportation, has raised $13.5 million for growth.

Founded in 2015 by IIT Kharagpur graduates Pushkar Singh, Sudarshan Ravi and Ankit Parasher, Bangalore-based LetsTransport has surface level comparisons with Uber and other on-demand services since it pairs companies with trucks to carry out their last mile distribution.

But that is really a cosmetic comparison. LetsTransport offers a range of product modules to manage fleets, including intelligent routing. Then, on the business side, its unit economic are far superior to Uber and co since the business customers it caters are not cost-motivated and will happily pay for a consistent service with guarantees.

For the truck operations, the service is designed to increase their average utility and get more jobs completed in quicker times. Singh, the company’s CEO, told TechCrunch in an interview that operating partners are typically seeing 40 percent efficiency improvements with a 30 percent reduction in distribution cost for the brands and retailers on the other side. Routing, he explained, is currently “done primitively by the driver” which is where LetsTransport tries to add value.

The service currently operates in seven cities in India and it has been used by big name customers like Coca-Cola, Amazon, Metro Cash & Carry and Big Bazaar, while some 20,000 truckers have carried out jobs on its platform to date. To help sweeten its appeal, the company goes beyond providing work to help trucking operators with insurance, after sale care and other maintenance services.

This Series B funding round was led by Bertelsmann India Investments with participation from China’s Fosun International and others. The company’s other investors including Japan duo GMO Venture Partners and Mitsui Sumitomo Insurance Venture Capital, as well as Rebright Partners and NB Ventures.

Singh told TechCrunch that the capital will go towards expanding to twenty new cities in tier-two India as well as looking into global opportunities.

“We’re trying to consolidate our position in India and [are] looking at products that can be offered internationally,” he said, explaining that markets in Southeast Asia and Africa could be in the pipeline. “The needs of an emerging market are quite similar… it needs a little localization but we have a great product.”

In particular, he added, LetsTransport has received expansion requests from its existing client base which would help when it comes to new launches. For now, though, the plan is to test specific modules in new markets before bringing other, more significant operational aspects of the business overseas.

Those modules could include the company’s smart routing system, which companies can deploy for their own transportation solutions. That’s a good way to reach new customers and develop a moat around those who use its marketplace business, too.

Pointing out that 14 percent of India’s GDP is spent on logistics — versus 7.5 percent in the U.S. — Singh is bullish that there is plenty of scope to digitize the system and make significant improvements to efficiencies.

“It’s a very large industry that’s ripe for disruption,” he said. “There are inefficiencies that should dead by now.”