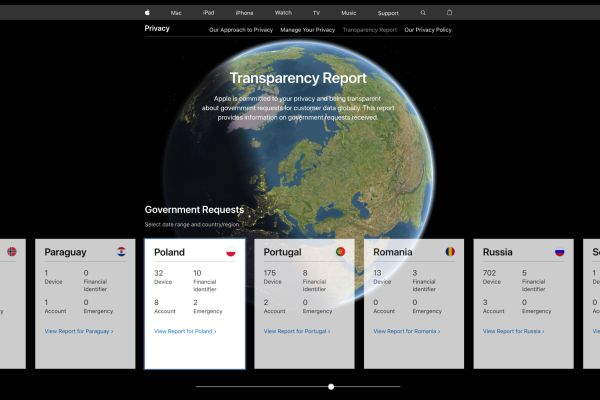 For years, the technology giant released a twice-a-year report on the number of government demands it received. It wasn’t much to look at in the beginning; a seven-page document with only two tables of data. Once in a while, Apple would tack on a new table of data as the government would ask for new kinds of customer data.

But that wasn’t sustainable, nor was it particularly easy to read — especially for the hawkish handful who would obsessively read and digest each report.

As other companies, like Microsoft and Google, received more demands over the years, they began to expand their own reports to help users to better understand who wanted their data, why, and how often. Apple knew its document-only reports didn’t cut it, and took a leaf from its Silicon Valley neighbors and pushed ahead with its own plan to publish its biannual numbers in a way that ordinary people — like its customers — can read and understand.

The company’s latest transparency report, out Thursday, still comes in its traditional PDF format for those who don’t like change, but now also has its own dedicated, browsable and interactive corner of Apple’s website. The new site breaks down the figures by country — but also historically to provide trends, patterns and context over years’ worth of reporting cycles, in a way that’s more in line with how other tech giants report their government data demands.

And, the company has CSV files for download, containing raw data for academics to drill deeper down into the numbers.

Apple has also reworked how it discloses national security requests, such as FBI-issued subpoenas like national security letters (NSLs) and orders issued by the Foreign Intelligence Surveillance Court (FISA). Since the introduction of the Freedom Act in 2015, passed in response to the NSA surveillance scandal in 2013, companies were given three options of reporting their secret orders — including the numerical bands it can release under what time period. Most companies disclosed the secret requests in bands of 500 with a six-month reporting delay to avoid any inadvertent interference with active investigations. Apple originally released its figures in bands of 250 requests, but is now expanding that to bands of 500 requests to standardize its reporting with other tech companies. It’s also breaking out its FISA content (such as photos, email, contacts, and device backups) and non-content requests (like subscriber records and transactional logs).

As for the figures, the transparency report reveals a rise in worldwide demands for data.

According to the report, Apple received 32,342 demands — up 9 percent on the last reporting period — to access 163,823 devices in the second-half of the year.

The report found Germany as the top requester, issuing 13,704 requests for data on 26,160 devices. Apple said that the figures were due to the high volume of device requests due to stolen devices. U.S. was in second place with 4,570 requests for 14,911 devices.

Apple also received 4,177 requests for account data, such as information stored in iCloud — up by almost 25 percent on the previous reporting period — affecting some 40,641 accounts, a four-fold increase. The company said the spike was attributable to China, which asked for thousands of devices’ worth of data under a single fraud investigation.

And, the company saw a 30 percent increase in requests to preserve data for up to three months to 1,579 cases, affecting 4,033 accounts, while law enforcement obtained the right legal process to access the data.

The company also said it received between 0 and 499 national security orders, including secret rulings from the Foreign Intelligence Surveillance Court, affecting 1,000 and 1,499 accounts.

Apple did not reveal any national security letters where the gag orders were lifted in this latest report.