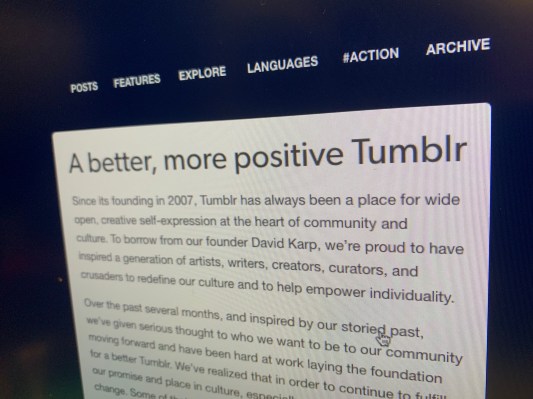 Let’s talk about the grown-up stuff — the adult content that Tumblr says it’s banning starting today. The wording of the company’s initial plans was admittedly confusing, upsetting both artists and sex workers who have begun to rely on the platform as a kind of safe place for self-expression.

The site issued a blog post today clarifying what had initially appeared to be a scorched earth approach to the explicit content as Tumblr frantically attempted to work its way back into Apple’s good graces. The note is a bit of a retread of earlier statements, while offering a much clearer vision of what things will look like on Tumblr’s end.

Of course, for some, this clarification might be coming too late. Many have already abandoned Tumblr for greener — or at least less family-friendly pastures. That’s due in no small part to the fact that it went on a kind of banning spree, following the reports of child pornography that caused it to be pulled from Apple’s App Store.

Tumblr relied on a machine algorithm that flagged posts at a rapid clip, resulting in frustrating and sometimes hilarious misfires. “[T]his is a complex problem,” the company writes, “and over the coming weeks we will gradually, and carefully, flag more adult content. (Yes, we will still make mistakes, but hopefully fewer and fewer.)”

The service also clarifies its appeals process, wherein users can protest posts they believe were incorrectly flagged. Content that is flagged will be hidden from view, but not deleted, according to the company.

Tumblr also correctly notes the important role the LGBTQ+ community has played in buoying the service over the past several years. Communities like this have found a home on the service and many now feel threatened by what appears on the face of it to be a bit of a Draconian new ruling.

LGBTQ+ conversations, exploration of sexuality and gender, efforts to document the lives and challenges of those in the sex worker industry, and posts with pictures, videos, and GIFs of gender-confirmation surgery are all examples of content that is not only permitted on Tumblr but actively encouraged.

And just to drive the point home, it offers a few examples of images that ought not be flagged by the service, ranging from life drawings to medical procedures to topless protesting. Of course, under its current algorithm, many of these have already been flagged.

It’s a nice gesture, but more to the point, it’s a site finally acknowledging a core audience that feels betrayed by the new rules. Tumblr’s own approach to them now feels fluid because it has to be. The company is toeing a difficult line between the openness users have come to expect and regulations put in place to please walled content gardens from the likes of Apple and the strict structures of its (and, for that matter, TechCrunch’s) corporate owner, Verizon.

It’s going to be a hard line to walk, but the future of Tumblr might very well depend on it.