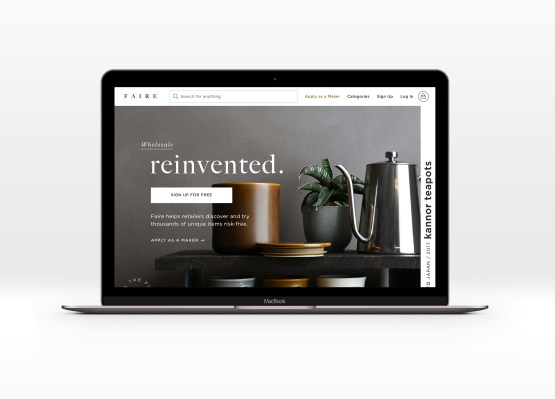 A quick glance at Faire suggests it’s a combination of Pinterest and Etsy, complete with trendy, pastel stationery, soap, baby products and more, all made by independent artisans and sold to retailers. Faire has today announced a $100 million fundraise across two financing rounds: a $40 million Series B led by Taussig at Lightspeed and a $60 million Series C led by Y Combinator’s Continuity fund. New investors Founders Fund, the venture firm founded by Peter Thiel, and DST Global also participated. The business has previously brought in a total of $16 million.

The latest financing values Faire at $535 million, according to a source familiar with the deal.

If you’re feeling a little bit of déjà vu, that’s because a similar startup also raised a sizeable round of venture capital funding, announced today. That’s Minted . The 10-year-old company, best known for its wide assortment of wedding invitations and stationery, raised $208 million led by Permira, with participation from T. Rowe Price. Though Minted is first and foremost a consumer-facing marketplace, it plans to double down on its wholesale business with its latest infusion of capital, setting it up to be among Faire’s biggest competitors.

Like Minted, Faire leverages artificial intelligence and predictive analytics to forecast which products will fly off its virtual shelves so as to source and manage inventory as efficiently as possible. The approach appears to be working; Faire says it has 15,000 retailers actively purchasing from its platform, including Walgreens, Walmart, Sephora and Nordstrom — a 3,140 percent year-over-year increase. It’s completed 2,000 orders to date, garnering $100 million in run rate sales, and has expanded its community of artists 445 percent YoY, to 2,000.

The company, headquartered in San Francisco, with offices in Ontario and Waterloo, was founded by three former Square employees: chief executive officer Max Rhodes, who was product manager on a variety of strategic initiatives, including Square Capital and Square Cash; chief information officer Daniele Perito, who led risk and security for Square Cash; and chief technology officer Marcelo Cortes, a former engineering lead for Square Cash.

“Our mission at Faire is to empower entrepreneurs to chase their dreams,” Rhodes wrote in a blog post this morning. “We believe entrepreneurship is a calling. Starting a business provides a level of autonomy and fulfillment that’s become difficult to find for many elsewhere in the economy. With this in mind, we built Faire to help entrepreneurs on both sides of our marketplace succeed.”