A former Ofo exec is launching his own scooter startup 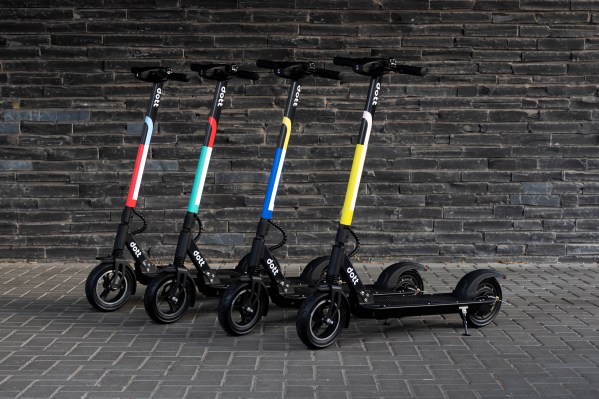 The funding extravaganza may be approaching its end for scooter “unicorns” Lime and Bird, but smaller startups in the micro-mobility space have continued to close venture capital rounds at a consistent pace. See Grin, Tier and Yellow for examples.

The latest is Dott, a European scooter startup founded by Maxim Romain, Ofo’s former head of Europe, the Middle East and Africa. Romain joined Ofo, a Chinese bike- and scooter-sharing company that raised more than $1 billion in venture capital funding but has struggled to scale overseas, in 2018 to help it expand. He only lasted seven months before realizing he could do it better himself.

“Why work for a Chinese company when we can do it ourselves in Europe where we better understand the market?” Romain told TechCrunch.

Dott, headquartered in Amsterdam, has raised €20 million in a round co-led by EQT Ventures and Naspers. Axel Springer Digital Ventures, DN Capital, Felix Capital and others also joined. Dott is using the capital to launch in several cities across Europe, beginning with an early 2019 e-scooter pilot at Station F, a startup campus located in Paris. Additional launches are in the pipeline, as are electric bikes.

As a result of its learnings from Ofo, Bird and Lime, all of which have struggled to keep their equipment out of disadvantageous spots, like trees, lakes and garbage cans, Dott says it’s built sturdier scooters. They have 10” wheels, wider decks, a double brake system for safety, a speed cap at 20km/h and apparently are able to hold a charge longer than competing scooters — though we couldn’t independently verify this.

Dott says it’s taking a friendlier approach to launching in new cities, again, unlike some of its predecessors. If you remember, Bird showed up in a number of cities without permission — a move that resulted in it being denied a permit to operate in San Francisco. Dott will hire local teams to collaborate with city officials to develop pilot plans tailored to each market and it won’t rely on gig economy workers to recharge, clean and maintain scooters. Instead, it will hire and train a team of Dott employees dedicated to maintenance in each city.

“I think a lot of the companies grow too fast in the sense that they don’t necessarily have the product that can enable them to be profitable but because they want to win the race,” Romain said. “They want to raise as much money as possible as quick as possible and to deploy scooters as quick as possible. This creates an environment for them where their unit economics are extremely bad.”

“That’s exactly what we saw with bike-sharing in China. In the end, the reality of the unit economics came back to bite them. It’s a risk. Lime and Bird are doing a lot to improve their hardware but it’s a risk for the industry. For us, we are taking the view that we really need to focus on the product so we have the right unit economics and we can be sustainable. If you want to make it happen, you have to make it happen in a sustainable way.”