Review: Amazon Echo Input is the easiest way to stream media to speakers 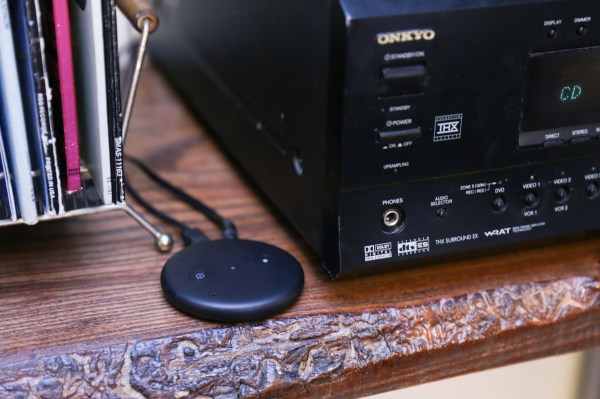 This is the Echo I’ve been waiting for.

Throughout my house, I have Amazon Echo Dots connected to stereo systems. In my office, I have a Dot connected to an Onkyo receiver and amp. In my basement, I have one hooked up to a small bookshelf system. Outside on the deck, a Dot serves audio to a small amp that powers outside speakers. There’s more, but the point is made. The Dot is a great device to add voice services to existing speakers. But with its built-in speaker, I’m paying for features I’m not using.

That’s why Amazon made the Echo Input.

The premise is simple: The Input is a Dot without a speaker. It has a mic, two buttons, and most importantly, a 3.5mm output. This output lets the Input serve media to amps and powered speakers — just like I’m doing so with a Dot.

Since the Input doesn’t have a speaker, it’s much smaller. It’s only a half an inch thick. It’s a tiny thing, and I found it does the job as well as a Dot

Plug it in, set it up, and the Input adds voice services to speaker systems. From Bluetooth speakers to bookshelf speakers, it’s a great way to bring the convenance of Alexa to speakers.

The device is basic. To be clear this is not a Hifi device. To me, that’s okay on most speaker systems since I’m just streaming Spotify and NPR. Hopefully Amazon makes good on producing the Input’s HI-Fi cousin, the $199 Echo Link. This device was announced a few months back and does the same job as the Input, but features TOSLINK and coaxial digital audio outputs for connections to a proper DAC. The $299 Echo Link Amp does the same but features a built in amplifier to directly power a set of speakers. The Input is great for smaller speaker, but the Echo Link should provide a higher fidelity experience — and now that Tidal is available on the Echo, there’s a proper source too.

The Echo Link is said to be released on December 13.

For $35 the Echo Link does its job well. However, during the holidays, the Echo Dot is only $29.99 or less and features the same 3.5mm output. Unless size is a concern, I would recommend buying the Dot while it’s on sale just in case you need the speaker at a later time.