With Congress focused on political bias, Google’s CEO gets off easy 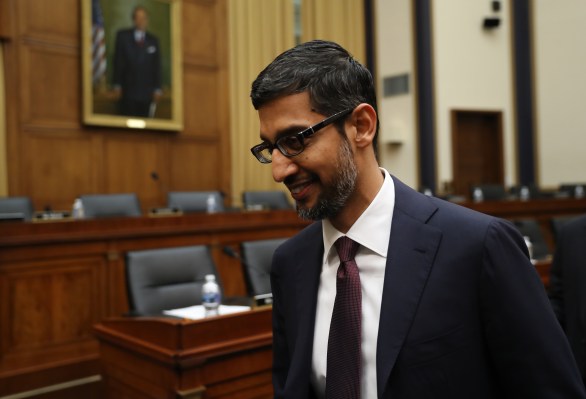 Google may have evaded the first few rounds of grill-a-tech-exec, but its CEO Sundar Pichai wound up in the hotseat on the Hill after all. Pichai appeared today, weathering a three and a half hour-long hearing solo with no competitors to offload congressional ire onto.

To his credit, Pichai performed very well. Instead of adopting Facebook’s flavor of over-rehearsed confidence and robot-like answers, Pichai came across as human, very competent and fairly sympathetic. That demeanor held, even as Pichai dodged here and pushed a handful of misrepresentations and mistruths there.

In a normal hearing, Pichai’s task would be tough, but this wasn’t a normal hearing. Pichai wasn’t called to Capitol Hill to testify on Google’s role in Russian disinformation, its controversial plan to re-enter China or recent news that Google+ exposed private data. Rather, he was summoned to Washington as the last gasp of a Republican led House Judiciary Committee hell bent on performing its own preoccupation with perceived political bias against conservatives.

The hearing, titled “Transparency & Accountability: Examining Google and its Data Collection, Use, and Filtering Practices” hewed closely to that aim in its mission to “examine potential bias” supposedly perpetrated by the search giant to the detriment of right-leaning voices. Over more than three hours of testimony, no proof surfaced that Silicon Valley’s left-leaning ideals had polluted Google’s search algorithms, which shouldn’t come as a surprise. No substantial evidence has surfaced indicating that conservatives are unfairly treated by Google to date, though that doesn’t keep many of the committee’s Republicans from treating those accusations as fact.

Unfortunately for them, perhaps, none of this flustered Google’s chief executive. Pichai patiently explained that Google was aware of many of the accusations from the right but that its own investigations had turned up nothing of substance. He gently disputed the questionable methodologies behind research purporting to show evidence of Google’s bias.

“I lead this company without political bias and work to ensure that our products continue to operate that way,” Pichai said. “To do otherwise would go against our core principles and our business interests.”

The partisan-fueled line of questioning led to a weird role dynamic in which Democrats on the committee pushed back on Republican talking points, defending Google instead of laying into the company on the myriad relevant issues of substance. For a political body ostensibly committed to holding power to account — and wielding its regulatory power in doing so — it was disappointing. Pichai mostly slipped through their hands.

Some of the committee’s members even acknowledged more substantial issues — anti-competitive behavior, Google’s position on China — before skipping back to the Republican-led committee’s agreed upon throughline. Still, there were a few moments of clarity.

When asked point blank by Rhode Island Rep. David Cicilline if Pichai would “rule out launching a tool for surveillance and censorship in China” during his tenure as CEO, Pichai dodged noticeably. Washington Rep. Pramila Jayapal cornered Pichai into a follow-up commitment on ending its forced arbitration practices for issues extending beyond sexual harassment. And a number of members of the committee pressed Pichai on Google’s invasive Android location-sharing practices in light of a recent New York Times report raising the issue, so it’s good to see Congress uncomfortable with that knowledge even if some members of this particular committee still don’t know the basics of how tech works.

In spite of these bright spots, Pichai got off easy. He managed to make it through more than three hours without any questioning about Google’s interest in providing technology for military applications. And no one quite pinned him down to any kind of commitment around Android location sharing concerns or Google’s inscrutable privacy policies, though that doesn’t come as a surprise. Under Democratic leadership next term, the committee hinted that it would try again.

“I look forward next year to working with you on some of the very serious questions we face,” Rep. Zoe Lofgren said. “It’s pretty obvious bias against conservative voices is not one of them.”

Tech executives, so insulated within massive, layered companies and cocooned in wealth, are rarely if ever accountable, on a personal level, to much of anyone. The opportunity to press them with questions in real time is almost never afforded to members of the press. Unfortunately, especially right now, there are many, many legitimate things to hold Google to account about that were not the premise of today’s hearing.

It’s all the more disappointing then that Pichai’s time on the stand was mostly squandered.