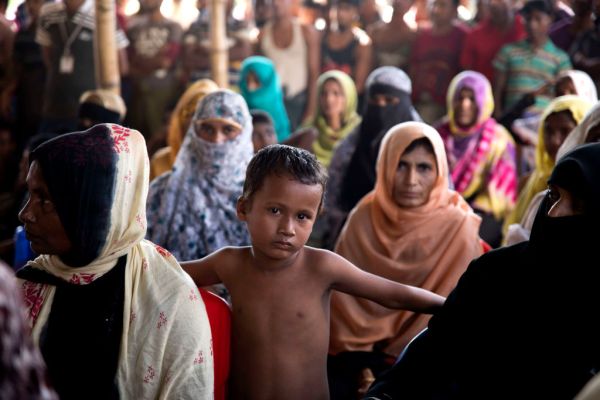 Twitter co-founder and chief executive officer Jack Dorsey recently went on a birthday trip to Myanmar. As Dorsey recounted in a series of tweets to his 4.1 million followers, he studied Vipassana meditation. The practice’s “singular objective is to hack the deepest layer of the mind and reprogram it,” Dorsey wrote, and it is “likely be good for those suffering chronic pain to help manage it.”

Myanmar has denied citizenship to Rohingya people, a minority in the country, for decades. In 2016, the systemic persecution of the Rohingya, the majority of whom are Muslim, escalated into wide-scale rapes and massacres. As more than 720,000 Rohingya people fled to neighboring Bangladesh, the United Nation High Commissioner for Human Rights described the atrocities against them as a “textbook example of ethnic cleansing.” UN-appointed investigators have called for top military officials in Myanmar to be prosecuted for genocide, crimes against humanity and war crimes.

Even though the crimes against Rohingya people have been well-documented in articles by major media outlets around the world (three of which are excerpted below), not once did Dorsey mention them in the more than a dozen tweets he wrote about his trip, which are also included.

(Article excerpts below from “Rohingya Recount Atrocities: ‘They Threw My Baby Into a Fire’,” written by Jeffrey Gettleman and published on Oct. 11, 2017 by the New York Times)

‘Hundreds of women stood in the river, held at gunpoint, ordered not to move.

A pack of soldiers stepped toward a petite young woman with light brown eyes and delicate cheekbones. Her name was Rajuma, and she was standing chest-high in the water, clutching her baby son, while her village in Myanmar burned down behind her.

“You,” the soldiers said, pointing at her.”‘

For my birthday this year, I did a 10-day silent vipassana meditation, this time in Pyin Oo Lwin, Myanmar 🇲🇲. We went into silence on the night of my birthday, the 19th. Here’s what I know 👇🏼

She squeezed her baby tighter.’

Vipassana is a technique and practice to “know thyself.” Understanding the inner nature as a way to understand…everything. It was rediscovered by Gautama the Buddha 2,500 years ago through rigorous scientific self-experimentation to answer the question: how do I stop suffering?

‘In the next violent blur of moments, the soldiers clubbed Rajuma in the face, tore her screaming child out of her arms and hurled him into a fire. She was then dragged into a house and gang-raped.’

Vipassana’s singular objective is to hack the deepest layer of the mind and reprogram it: instead of unconsciously reacting to feelings of pain or pleasure, consciously observe that all pain and pleasure aren’t permanent, and will ultimately pass and dissolve away.

‘By the time the day was over, she was running through a field naked and covered in blood. Alone, she had lost her son, her mother, her two sisters and her younger brother, all wiped out in front of her eyes, she says.’

Most meditation methods end with a goal of strengthening concentration: focus on the breath. This was not Gautama’s goal. He wanted to end his attachment to craving (of pleasure) and aversion (of pain) by experiencing it directly. His theory was ending attachment ends his misery.

‘Rajuma is a Rohingya Muslim, one of the most persecuted ethnic groups on earth, and she now spends her days drifting through a refugee camp in Bangladesh in a daze.’

Imagine sitting on a concrete floor cross-legged for an hour without moving. Pain arises in the legs in about 30-45 minutes. One’s natural reaction is to change posture to avoid the pain. What if, instead of moving, one observed the pain and decided to remain still through it?

Many people in the refugee camps have been eerily stoic — seemingly traumatized past the ability to feel. In dozens of interviews with survivors who said their loved ones had been killed in front of them, not a single tear was shed.

But as she reached the end of her horrible testimony, Rajuma broke down.

Vipassana would likely be good for those suffering chronic pain to help manage it. That’s not the goal of course, but definitely a simple practice to help. Being able to sit without moving at all for over an hour through pain definitely teaches you a lot about your potential.

“I can’t explain how hard it hurts,” she said, tears rolling off her cheeks, “to no longer hear my son call me ma.”

Meditation is often thought of as calming, relaxing, and a detox of all the noise in the world. That’s not vipassana. It’s extremely painful and demanding physical and mental work. I wasn’t expecting any of that my first time last year. Even tougher this year as I went deeper.

Instead, she is forced to live with the horror and shame every time she recalls what happened.’

I did my meditation at Dhamma Mahimã in Pyin Oo Lwin. This is my room. Basic. During the 10 days: no devices, reading, writing, physical excercise, music, intoxicants, meat, talking, or even eye contact with others. It’s free: everything is given to meditators by charity. pic.twitter.com/OhJqXKInD3

‘Fatima, whose real name was changed to protect her privacy, is a widow and mother of five girls. She fled her village of Merula, in Myanmar’s Rakhine state, as a government-backed attack on the minority Rohingya population escalated, in what the United Nations described as “textbook ethnic cleansing”.’

I woke up at 4 am every day, and we meditated until 9 pm. There were breaks for breakfast, lunch, and walking. No dinner. Here’s the sidewalk I walked for 45 minutes every day. pic.twitter.com/xDI7gLx6mW

‘Fatima’s daughters crossed into Bangladesh before her, as it is the custom for Rohingya women to send their children ahead with the village men making their way to the border. As the violence spiralled into chaos, she decided to leave.’

On day 11, all I wanted to do was listen to music, and I again turned to my favorite poet, @kendricklamar and his album DAMN. The greatest effect coming out of silence is the clarity one has in listening. Every note stands alone. https://t.co/FliDncWfnC

‘In August last year, she reached Daungkhali Char, an island in Myanmar across the Naf River from Bangladesh, before her luck ran out.

She said two Myanmar soldiers dragged her away to a field and for the next two days raped her repeatedly, sometimes to the point where she lost consciousness.’

Myanmar is an absolutely beautiful country. The people are full of joy and the food is amazing. I visited the cities of Yangon, Mandalay, and Bagan. We visited and meditated at many monasteries around the country. pic.twitter.com/wMp3cmkfwi

‘”I don’t know how many times they violated my body,” Fatima said in a voice barely above a murmur.’

The highlight of my trip was serving monks and nuns food, and donating sandals and umbrellas. This group of young nuns in Mandalay and their chanting was breathtaking and chilling. pic.twitter.com/E2nHFOsHu2

‘When the soldiers decided to move on, she crossed the Naf River into Bangladesh, numb to the bone and dazed out of her mind.

“I was unaware of my senses for a while,” she said. “I found out five months later I was pregnant. I tried to have an abortion by swallowing pills, but that didn’t work.”‘

We also meditated in a cave in Mandalay one evening. In the first 10 minutes I got bit 117 times by mosquitoes 🦟 They left me alone when the light blew a fuse, which you can see in my heart rate lowering. pic.twitter.com/rz59Wx9yHF

‘She looked down at the baby nestled in the crook of her arm. “I didn’t tell anyone he was conceived through rape.”

Four-month-old Bilal fussed and started wailing. Distractedly, Fatima rubbed his back in circular motions until he fell quiet again.’

I also wore my Apple Watch and Oura ring, both in airplane mode. My best meditations always had the least variation in heart rate. When I wasn’t focused, it would jump around a lot. Here’s a night of sleep on the 10th night (my resting heart rate was consistently below 40). pic.twitter.com/9fiz8s8DR5

(The following excerpts are from “The Survivors of the Rohingya Genocide” by Jason Motlagh, Aug. 9, 2018, Rolling Stone)

‘The Rohingya have been called the “world’s most persecuted minority.” An estimated 1.1 million lived in Myanmar before the crisis, the descendants of Muslim traders who settled in the region more than 1,000 years ago. Though many Rohingya families have documentation going back generations, they are denied citizenship and basic rights.’

Vipassana is not for everyone, but if any of this resonates with you even in the slightest, I’d encourage you to give it a try. If in the US, this center in Texas is a great start: https://t.co/4Brke5RU85

‘Two months after the country’s first modern elections, in June 2012, anti–Muslim pogroms broke out in Rakhine following the rape and murder of a Buddhist woman; 140,000 Rohingya were forced into open-air concentration camps. Squeezed between barbed wire and the sea, tens of thousands fled by boats to Thailand and Malaysia, only to become ensnared by traffickers and tortured for ransom.’

Thanks for reading! Always happy to answer any questions about my experience. Will track responses to this thread. I’ll continue to do this every year, and hopefully do longer and longer each time. The time I take away to do this gives so much back to me and my work. 🇲🇲🙏🏼🧘🏻‍♂️

‘In May 2015, the crisis made global headlines when boats packed with starving Rohingya were stranded at sea. For weeks, no country would accept them. “That’s the unique burden stateless people carry,” says Wade. “Even those nations most vociferously condemning the military know it’s not their problem.”’

A repatriation agreement between Bangladesh and Myanmar was put on hold in November as refugees protested that they would not return unless their demands for citizenship and human rights are met.