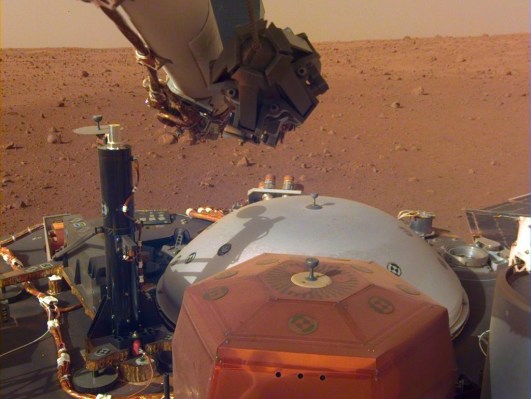 The InSight Mars lander accomplished a perfect landing last week on the Elysium Planitia region of the planet, where it is hard at work preparing to drill into the surface (and taking selfies, of course). But one “unplanned treat” is a recording of the wind rolling across the Martian plains — which you can listen to right here.

Technically the lander isn’t rigged to detect sound, at least in the way you’d do it if you were deliberately trying to record it. But the robotic platform’s air pressure sensor and seismometer are both capable of detecting the minute variations as the wind rolls over it. The air pressure sensor, inside that silver dome you see above, produced the most normal-sounding signal, though it still had to be adjusted to be more like what you’d hear if you were there.

“The InSight lander acts like a giant ear,” explained InSight science team member Tom Pike in a NASA news release. “The solar panels on the lander’s sides respond to pressure fluctuations of the wind. It’s like InSight is cupping its ears and hearing the Mars wind beating on it.”

Curious what it sounds like? The resulting recording can be listened to on Soundcloud or below:

Sounds a lot like regular wind, right? Well, what were you expecting? Like so many aspects of space exploration, the prosaic nature of the thing itself — a rock, a landscape feature, a breath of wind — is offset by the fact that it’s occurring millions of miles away on an alien world and relayed here by a high-tech robot. Wind on Mars might not sound much different than wind on Earth — but surely that’s not the point!

We’ll have more recordings soon, I’m sure, so you can use it as noise to fall asleep to. But even better sounds are forthcoming: the Mars 2020 rover will have actual high-quality microphones on board, and will record the sounds of its landing as well as the Martian ambience.