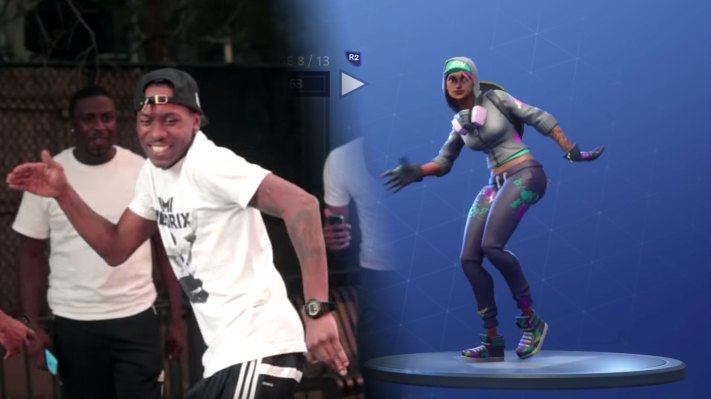 Rapper 2 Milly is suing Epic Games over Fortnite’s use of his dance move, the Milly Rock.

Defendants capitalized on the Milly Rock’s popularity, particularly with its younger fans, by selling the Milly Rock dance as an in-game purchase in Fortnite under the name “Swipe It,” which players can buy to customize their avatars for use in the game. This dance was immediately recognized by players and media worldwide as the Milly Rock. Although identical to the dance created, popularized, and demonstrated by Ferguson, Epic did not credit Ferguson nor seek his consent to use, display, reproduce, sell, or create a derivative work based upon Ferguson’s Milly Rock dance or likeness.

Unless you live under a rock, you’ve seen the Milly Rock. Rock dwellers can check it out below:

On Fortnite, the dance is called The Swipe It, and it looks like this:

Back in July, around the time that Fortnite unveiled the Swipe It dance, Chance the Rapper pointed out that Epic Games tends to use dance moves popularized by famous artists in the game. These emotes cost money, and heavily contribute to the hundreds of millions in revenue that Epic Games pulls in on a monthly basis via its free-to-play game.

Fortnite should put the actual rap songs behind the dances that make so much money as Emotes. Black creatives created and popularized these dances but never monetized them. Imagine the money people are spending on these Emotes being shared with the artists that made them

Moreover, the default emote on Fortnite is the relatively famous little routine from actor Donald Faison on the show Scrubs.

Dear fortnite… I’m flattered? Though part of me thinks I should talk to a lawyer…

This lawsuit is particularly complicated considering that it’s over a dance move, which is difficult to lock down with copyright. The Verge reported that this lawsuit is the first of its kind, in that it challenges the gaming industry’s use of pop culture as for-profit virtual items. NPR reports that the U.S. Copyright Office “can’t register short dance routines consisting of only a few movements or steps with minor linear or spatial variations, even if a routine is novel or distinctive.”

That doesn’t mean there is no way to protect choreographic works. Those works, however, must be defined as “a series of dance movements or patterns organized into an integrated, coherent, and expressive compositional whole,” according to NPR.

Concluding the 22-page filing is a request for injunctive relief, which would bar Epic Games from using 2 Milly’s likeness in the game, as well as financial compensation for the use of the Milly Rock dance.

We reached out to Epic Games and will update the story if/when we hear back.