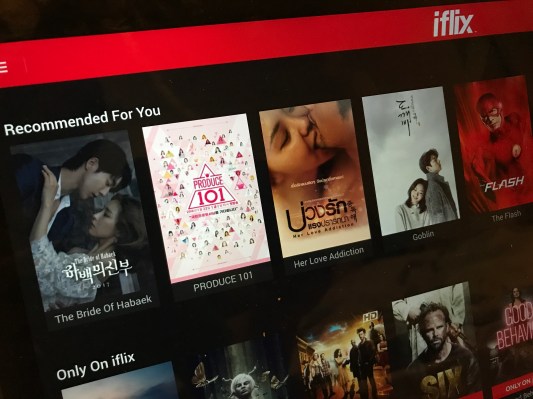 Netflix is increasing its efforts in Asia after it commissioned more local content and began testing more aggressive price points, but one local rival is hitting back with a program to spotlight promising creators in the region.

Malaysia-headquartered Iflix, which operates in 26 countries across Africa, the Middle East and Asia, today announced a $5 million program to find 30 filmmakers across four of its largest markets: Indonesia, Malaysia, Bangladesh, and the Philippines. The company, which has raised nearly $300 million from investors that include Sky, offers a freemium service with a paid tier that costs around $3 per month. It claims an audience of ‘millions’ of users.

The twelve-month initiative will be run alongside Next 10 Ventures, a digital content program from ex-YouTube exec Benjamin Grubbs, with the aim of helping would-be or part-time filmmakers to fully pursue their passion.

“There’s ad revenue in some markets but it may not be sufficient enough to enable you to have a full-time career,” Grubbs, who was previously YouTube’s global director of top creator partnerships, told TechCrunch in an interview. “A commitment up front to support creative storytellers is a positive element fo the ecosystem… there are things people want to do without waiting for brand sponsorship.”

In addition to financing, the program will provide mentoring, equipment and other assistance to produce content exclusively for Iflix.

Iflix launched its own original content program 18 months ago, and Craig Galvin — the company’s global head of content — said that the initiative isn’t just limited to creators’ local markets, which might be a logical assumption given Netflix’s more global approach.

Instead, Galvin — who launched Iflix’s first short-form video program earlier this year — argued that there is the potential to reach Iflix’s global viewers.

“We do see our pathway to be more local-centric but I do believe some of this content will travel well beyond their territories,” he told TechCrunch.

“For many, the remuneration isn’t quite there yet,” Galvin added. “So for us, it’s allowing them some scope to help reach their full potential.”

The short videos supported by the program won’t be quite as brief as the seconds-long shorts you’ll find on TikTok, the fast-growing video platform, since Galvin and Grubbs are seeking more episodic content. However, they remain open to “exploring experimentation” — potentially series of one-minute shorts — if such proposals are judged to resonate with audiences.

“There’s no definitive number but we’re expecting around 1,500 pieces of content as part of this program,” Galvin said, adding that he hopes to expand the program to cover more, or all, of Iflix’s markets in the future.

Filmmakers wanting to apply to the program can do so on the website here.

One obvious comparison to the Iflix initiative is Viddsee, a Singapore-based streaming service that features short video content from independent filmmakers in Asia and beyond.

Founded in 2012, Viddsee has raised a little over $2 million to date and it recently introduced a crowdfunding feature that allows filmmakers to raise money directly from its global audience. The company has also helped filmmakers to find brand sponsors in order to get the checks required to fund production.