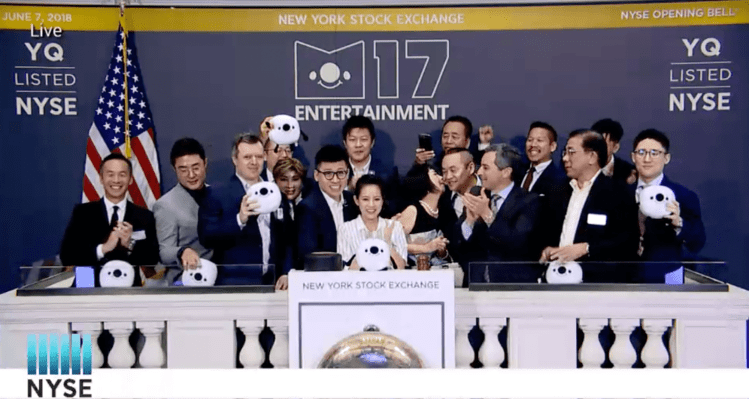 M17, the Taiwanese streaming company that controversially priced on the NYSE but didn’t list, has returned to the private markets after it raised a $25 million funding round.

The round was led by Terry Tsang — CEO of Hong Kong-based games company Madhead — with participation from Pavilion Capital, Stonebridge Ventures and existing investors. This new investment follows a $35 million investment in June, which came just a week after the botched IPO. There’s likely more coming: M17 said it expects to receive “additional funding” in the next two months.

When it filed to go public back in June, M17 originally aimed to raise $115 million but weak interest saw that figure cut to $60 million. (That sum is matched by these two rounds.) But even that didn’t happen as the company priced, rang the bell (with photos) but ultimately didn’t debut. It officially blamed “settlement issues” although founder Jeffrey Huang took to Facebook to lash out at investment banks Citigroup and Deutsche Bank who he blamed.

Back to the here and now, M17 said that it is on target to book $170 million in sales for this year. That’s up from $79.5 million in 2017, although the business posted an overall loss of $36.4 million for the year. The company didn’t give guidance on its expected profit/loss for the year.

M17 is the company’s most lucrative unit, but it does also other services including dating via Paktor — which merged with M17 last year. Overall, M17’s revenue grew impressively to reach $37.9 million in the first quarter of 2018 but that came with a $24.8 million loss, according to the listing document, which underlined the challenge of making the business profitable.

Added to that, finances were (likely still are) tight.

At the time of its listing application, M17 said it had $31.4 million in cash and cash equivalents so these funding rounds are fairly critical to the firm. Nonetheless, the company said it plans to invest the capital on growth, including infrastructure and features, resources and “training,” and expansion into the U.S.

M17 has released two new apps, a TikTok -like short video service called PiePie and, for the U.S. market, a streaming app called LiveAF. In case, you’re wondering, that’s Live Artistic Freedom rather than any other words you might be thinking of.

The company said it has some 600 employees spread across seven offices in Taiwan, Singapore, Hong Kong, Japan, South Korea, the U.S, and Malaysia.